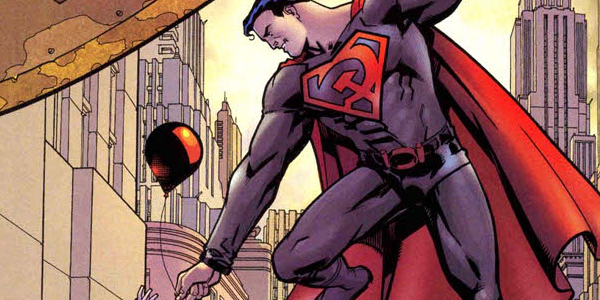 We all know the origin of Superman, right? As Krypton is about to explode Jor-El sends his only son in a rocket bound for Earth, it crashes in a corn field in Kansas.  What happens if the rocket carrying the Man of Steel to our planet crashed in Russia?

Writer Mark Millar has given us just that scenario on the Superman mythos. This book features art by Dave Johnson, Kilian Plunkett, Andrew Robinson, and Walden Wong. The TPB also has a stunning introduction from film producer Tom DeSanto, and a sketch art gallery by Johnson, Plunkett, and the great Alex Ross. This TPB collects the Superman Red Son #1-3 from 2003.

Instead of landing in the arms of Ma and Pa Kent, Kal-El lands in the arms of Josef Stalin. No longer is Superman an American icon, but now a Soviet comrade. All the elements that make Superman great are in this book: Lex Luthor, Lois Lane (or should I say Lois Luthor), Jimmy Olsen, and cameos from Batman, Wonder Woman and Hal Jordan (the Green Lantern). All of them the same yet reinvented. Even the “S” on the chest of Superman is replaced with the Soviet sickle. Even with these changes Superman still believes he is doing what is right with the best intentions.

This book is not just about bad and good. This is a journey that makes you see the other side of the coin.  I enjoyed seeing the characters written this way and I do think that you will too. Seeing Batman in Soviet attire is actually pretty cool. I give this book a 9/10.