TPB Pick of the Week: The New Teen Titans- The Judas Contract

Are you excited for DC’s newest animated feature? Check out where the inspiration came from by comic greats Marv Wolfman, and George Perez. 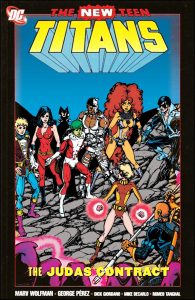 One of the best Teen Titans books I have ever read! In this adventure, we learn Slade has a son called Jericho. Jericho is mute but he’s a meta-human that can jump into anyones body and take control over them. Jericho for some reason seems to have an uncommon effect on people, this effect is to make people around him, trust him!

The story starts off with the Teen Titans fighting Brother Blood while unbeknownst to the Teen Titans, one of their own is recording their every movement. Terra seems to have an inappropriate relationship with Slade. She working with Slade because he is going to take down the Titans and she wants to join him, just for the fun of it. Unlike in the Teen Titans cartoon, Slade doesn’t really have anything against the Titans; Brother Blood is paying him to do it, so that is what he’s going to do.

We are also shown how powerful Terra really is. She gives Slade a run for his money in like the second chapter of the book. Then later we see Beat Boy’s true strength come out during some combat training.  He’s not the idiot that the cartoon makes him out to be. Beast Boy while he has a sense of humor, combines his levity with a little bit of wit and a bit of lasciviousness.

Dick Grayson also stops being Robin in this story and becomes Nightwing. He becomes his own man with no batstrings attached. Jericho joins up. Kid Flash leaves to go to college. Beast Boy really liked Terra, even when she tried to kill all of them BeastBoy still defended her. Saying “Slade was controlling her!” To be honest that isn’t so far-fetched not in his world anyway. Sadly for Beast Boy, Terra was doing everything according to her own freewill. 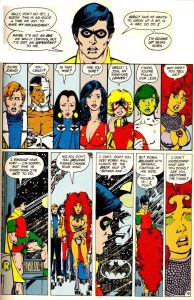 There are many that think this book ended with too many loose ends. That this story officially ends a few issues after this original arc. This storyline was the starting point of many changes in the Titans lives.
Wolfman and Perez brought us into the lives of the Titans and showed that they have more problems in their everyday lives than just defeating the bad guys. Then the real plot comes in. I love the way they have it sneak up on you. They make Deathstroke what he is: The perfect assassin. The leaving of Wally West showed his low self-esteem. Dick quitting as Robin was a major decision that has affected the entire DC world. This still stands the test of time from two of the greats of any era of comic books. The attention to detail in every facet of this book is incredible, from the highly detailed artwork to the plot and subplots. JQ gives this story a 8.6/10.