TPB Pick of the Week- Thor: God of Thunder, VOL 3: The Accursed

The Thor mythos in the comics is a perfect blend of Norse mythology, epic fantasy, and superhero tale. Jason Aaron does an amazing job continuing the trend of amazing stories. 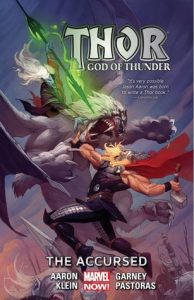 The first part features Thor returning to Earth and spending time there, interacting with the various human friends he has made over the years and performing the sorts of acts you’d expect a noble, honorable god like Thor to perform. It’s hard to explain, but this really humanizes Thor. This sort of story telling could easily become cheesy to the point of being unbearable, and it definitely straddles that line very closely at times, but the fact that it is so poignant and affecting is a testament to Aaron’s writing.

This arc features the return of Malekith the Accursed. This is the meat n’ potatoes of the volume and once again, Aaron hit it out of the park. I don’t want to spoil too much of the plot, but needless to say, this is a great adventure story. It is filled with very compelling characters, as Thor is joined in his quest this time in the form of the “League of Realms”. This group, appointed by the “Congress of Worlds,” is comprised of appointed warriors to represent each main race in the nine realms. It’s an odd set-up and could come across as a cheesy Thor-centric Avengers rip-off, but it really is an interesting idea. The amount of humor and intensity pulled out of such a motley crew working together to tackle a truly terrorizing villain is superb. Each character, whether it’s the fancy dual-pistol wielding light elf Ivory Honeyshort, or the more taciturn dwarf Screwbeard, son of No-ears, son of Headwound, all have great, unique personalities that bounce off each other and Thor quite nicely. Lots of belly-laugh inducing humor in this one, as well as great tension. Aaron’s characterization of Malekith is very distinctly unique. Malekith’s psychotic sadism and senseless plans are made even more unnerving by his lighthearted and eloquently refined manner. The story here is tense, full of gravitas as well as a more down-to-earth grittiness than his past work.

The volume ends with a fantastic one-off story revolving around a young Viking Thor back in the past and partying with a drunken dragon, and then kicking its ass. It doesn’t get much better than that. It’s a great, fun romp, but it’s also pretty moving as well, heartbreaking even. I’ll just leave it at that. I find the idea of young Thor to be brilliant, as he is a way to show major character development without erasing decades of comic history. I love that. 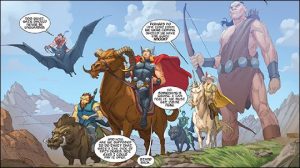 The art in this volume is definitely the aspect with the least amount of coherency. This volume features three different artists Nic Klein, Ron Garney (who the most part, did a fantastic job), and Das Pastoras. Each put thier own spin on the story and usually when the art styles shift so dramatically it can put some readers off, but the story telling was great and kept me into it.

The story moves along at an excellent pace, is brimming with a brilliant sense of cinematography, and is full of compelling, well-developed characters. So whether you’re a major Thor fan, a big comic book fan in general, or even a newcomer to the character and want a good read, this is as good as any volume you’ll find out there to read.