TPB Pick of the Week: Once Upon a Time-Shadow of the Queen 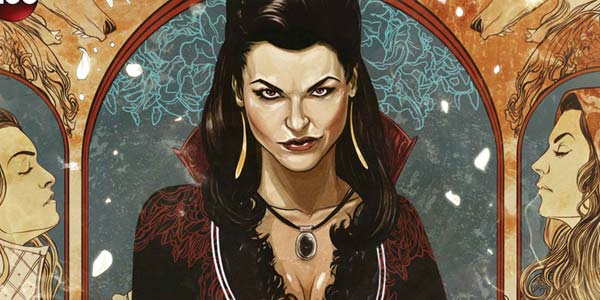 If you are a fan of the the ABC hit TV show then this book is just right!

I can’t imagine anyone who doesn’t watch Once Upon A Time picking this graphic novel, but hopefully for Marvel and ABC, the Once Upon a Time core audience is rabid enough that they will pick up this book especially since it seems to fit into the canon of the show.

The first thing the creators did right was set the story completely in the Enchanted Forest and tell it in chronological order. Switching back and forth with Storybrooke and bouncing in time is a comic book trademark trait, but I think in would have worked against the story here. The second thing they did right was make this a Canon story (from the executive producers’ introduction), it’s clear this is a story they had developed during season one but were unable to fit into the constraints of the season.  As much as fans love and miss The Huntsman and Red Riding Hood, the show has moved on from their stories. The story is paced well and the dialogue at least rings true to the actors, especially the dialogue for the Evil Queen (somewhat less so for Red, sad to say). The shows producers and Marvel have continued to coordinate their stories and made more of these stand-alone graphic novels to fill in the gaps in story for the secondary characters like the Huntsman and Red (and the werewolf tribe Red is exiled from).

The thing that works against this book is the wildly variable artwork. Unfortunately, the chapter art doesn’t all mesh– chapter two in particular doesn’t fit or flow with the rest of the book’s look at all. It’s not that the art is bad, it’s that the sudden change in look threw me out of the story. I’m not sure what the intent was of having multiple art styles telling the same continuous story but this has been the trend in some stand alone Graphic Novels of late.

As a Once Upon a Time story I give this book a MUST read to show fans. It is a quick read and it’s also canon to the show. JQ gives this book a 6/10 because the art totally threw me for a loop.