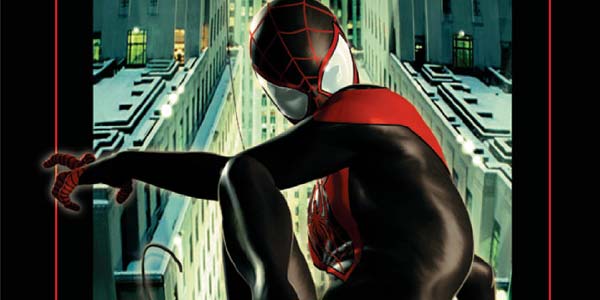 The topic of Marvel regaining Spider-Man for the next few movies, and the rumors surrounding the casting of Peter Parker made me revisit this book.

One of the greatest design aspects of Spider-Man’s full body costume has always been the fact that anyone could be inside that mask. No matter the race, color or creed, Spider-Man could be any one of us. For fifty years Spider-Man has been Peter Parker, a Caucasian kid from Queens… but after he was killed, the mantle and the legend of Spider-Man was passed on to Miles Morales a half-African American, half Latino teenager from Brooklyn.

Miles Morales made his debut in the pages of Marvel Comic’s Ultimate Comics Spider-Man series by Brian Michael Bendis. This TPB collects the first five issues of this series in the Ultimate Comics Spider-Man.
Growing up in Brooklyn is not so easy for Miles. His family has hardships and his parents work to give him everything they did not have, like a chance to escape poverty. Miles is fortunate and wins a lottery and a spot in a prestigious charter school. Things are looking up for him. Then a genetically enhanced spider bites him and his whole world changes. With mysterious powers and no idea how to use them Miles is overwhelmed with fear. He just wants to be normal, but when the original Spider-Man dies to save the world, Miles learns the same lesson that Peter Parker did– with great power comes great responsibility.

Since the debut of the “Ultimate” line of comics Bendis has told the story of Peter Parker in more than 150 issues of Ultimate Spider-Man. But everything has changed and this story shows that anything can happen.
Bendis’ introduction of Miles is handled well. The story is built around Miles and his family life. We are shown who he is and why we should care about him. He has real teenage problems and is trying to fit in. The story feels like a natural progression from start to finish. The danger for Miles increases with each passing moment and Bendis makes you understand how tough this is on him while showing how cool it would be to get spider powers.

Sara Pichelli’s art is stunning in its ability to capture the story of Miles on paper. Her artwork gives life to this new character. The artwork shows the emotion of the story from smiles to grimaces to concern; she tells you how the characters are feeling just by looking at them. Then there are smaller things like Miles’ first costume. It is an ill fitting Halloween costume that his friend has given him. It bunches up in certain spots and fits loosely in others. Small details like this add so much charm and creativity to the story.

Miles Morales is so much like Peter Parker and yet so different. He learns his lessons from the sacrifice of another and knows that the world will always need heroes. A hero’s worth is not measured by the color of his skin but by his actions. Miles Morales is a fun new character and is a welcome addition to the pantheon of Marvel Super Heroes. I enjoy the character of Miles and yes I love me some Peter Parker but the persona of Spider-Man is universal! JQ gives this book 8.5/10!!