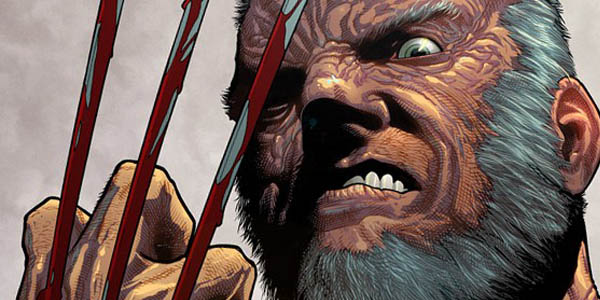 There have been many possible futures and alternate realities for the X-Men, but Old Man Logan raised the apocalyptic future bar extremely high.

The mistake of many writers who try to tell a future stories rely on exclusively in the same narrative schematics, Mark Millar however finds a different way to tackle on alternative futures. His idea is easy to understand: THIS is the future and there’s now way around it, it has been that way for over fifty years; it is a dismal future but no one could change it. When all the villains in the world decided to work against the heroes, they were able to vanquish them all. The villains conquer America and divided it among themselves. Magneto, Doom, Kingpin, Red Skull, all got what they wanted (this idea was revisited recently in the AXIS story line). 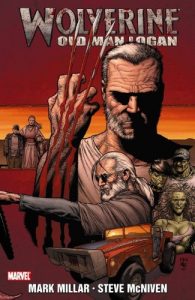 Defeated and emotionally scarred, Wolverine has sworn never to be a party of violence again. No one has seen his claws in five decades, and it seems like no one else will. What happened the night all the heroes were killed? No one knows for sure except Wolverine, but he prefers to find peace in oblivion. It is in this scenario in which the story begins. Wolverine, once the most dangerous X-Man is dead. He is only Logan now, an old man married with a red haired woman. They have two children and they are farmers living in the lands of the Hulk gang, the grandsons of Bruce Banner himself. In order to survive in this fierce territory they must pay tribute to the Hulks, or else suffer the consequences. When the day to pay the rent comes closer, Logan and his wife realize that this time they won’t be able to make do.

Then a blind white-haired Hawkeye reaches out to his former colleague and offers him a job. He also promises to pay him five hundred dollars, more than enough to cover all the debts. Reluctantly, Logan decides to accompany his old friend, holding fast to the fact he is no longer the man he used to be and has no intentions to fight anyone. Their mission looks simple enough; travel across the US, from one coast to the other, carrying a precious cargo to deliver to the President’s Quarters (formerly known as Washington). The trip should take weeks, but Hawkeye has got a hold of the `Spider-Buggy’, a vehicle that might be the last testimony of human technology, speeding along this road trip.

There have been no superheroes for half a century, and now people worship them in brusquely-made shrines. There is a true cult of the superhero people. They have become an abstract idea, or ideal, and nothing else. 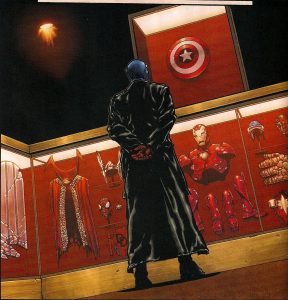 Why was this book considered one of the best Wolverine stories ever? Well, for starters it is one of the best examples of intelligent writing and extraordinarily beautiful art coexisting in perfect harmony. Writer and artist have achieved such a powerful rapport that everything flows naturally. This is no easy feat, after all, most of the time one of the aspects overcomes the other, if the writing is too good then the art looks bland, and when the art is excellent then the writing looks uninspired. Mark Millar and Steve McNiven had worked before on the first Marvel Civil War.

The road trip gives readers a look at the state of the Marvel Universe, and when they arrive at their destination the mystery of the cargo is finally revealed; a case with 99 samples of the super soldier serum. The serum was going to be used to rebuild the former heroes, but in the struggle it is lost. After the battle Logan is only left with few thousands of dollars to go home with. Although he arrives two weeks before the payment date, he finds out that the Hulk gang has viciously attacked his family. Filled with an ancestral rage, he decides to once again pop his claws. Faithful to the character’s trajectory, Millar gives us a Wolverine in full berserker mode. He single-handedly massacres the entire Hulk family, leaving papa Banner for last.

The `open ending’ of Old Man Logan is consequent with the series. After all, as it was announced in the beginning, this is not a future that can be automatically `fixed’ with a time machine. This is a future that must be lived. Given that Old Man Logan now appears in two ongoing titles it seems that this may play out to be a true future unless he uses the opportunity in the present to change a few things.

JQ gives this story a 9/10. When the Art and Story are on point you cannot deny greatness!