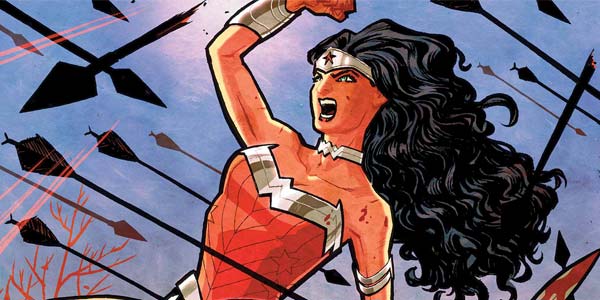 One of the better titles in DC’s New 52 relaunch, Wonder Woman is a smart soft reboot featuring the same character we all know and love, but with some tweaks to enhance her mythology.

New 52 Wonder Woman had my interest piqued from the get-go. I think Brian Azzarello’s Joker is one of the grittiest comics I’ve read in a while, and with that being said I had no idea how he’d handle this story. I was pleasantly surprised… Azzarello creates his own new mythos and destroyed her original, laughable origin story. That ticked off a lot of old school WW fans, but he replaced it with something much more interesting. This tweak to her origin leads to a great reason for her leaving the island and becoming Wonder Woman.

What Azzarello has done is tie Wonder Woman to Greek mythology, but this isn’t the traditional Greek gods in white togas– they look more supernatural and each of them have their own agenda. They’re a godly, dysfunctional family, and their personalities are very true to classic Greek myths as they personify aspects of nature.

“New Blood” begins with Wonder Woman protecting a girl who sought her help. Along the way, Wonder Woman makes new discoveries about about herself, her family, and her past. There’s intense action and some horror elements, but nothing the Amazon warrior princess can’t handle!

Cliff Chang’s art was weird at first but now I find it iconic and fitting with the style of the comic. The violence is necessary, all the people complaining about AN AMAZON WARRIOR killing just need to really analyze that statement.

To sum things up, this Wonder Woman welcomes all readers who are into superheros, mythology, and sand & sword fantasy genre. It explores themes of truth, betrayal, family, and loss. It’s more grounded than previous versions of Wonder Woman, and it’s something virtually all readers can get into! JQ gives this a 7.5/10.