Greg Rucka returns to the character he wrote so well pre-New 52. This story is an amazing psychological thriller and action adventure.

Wonder Woman Rebirth kicks off the Amazon’s new era with the question of how Diana’s numerous origin story rewrites have come to affect her character. Despite being one aspect of DC’s main trinity, Wonder Woman has had a few questionable retcons and weaker story arcs over the year. Rebirth embraces this disparity by canonizing the various origin stories and setting up the idea that Diana is being manipulated and outplayed by an outside force.

The two main origin stories for Diana (that she was a child made of clay and given life by the gods and that she was a child of Zeus) are the focus here with Diana enlisting the help of her friend turned enemy Cheetah to hunt the truth. While also reigniting her flame with old friend Steve Trevor. Rucka has woven an intriguing and fun first volume that has Wonder Woman questioning her very perception of reality. While any fans of Wonder Woman’s recent story arcs may be disheartened to hear that those stories are potentially being voided by this new twist it is a cool new direction for the character and I am excited to see where Rucka takes things from here.

Fans of the comic will probably find this easier to read than by individual issues as the first run of the Rebirth era Wonder Woman series bounces between “The Lies” and “Year One”. This book collects the odd-numbered “The Lies” issues #1, #3, #5, #7, #9, #11. The even numbered issues revisit Wonder Woman’s classic origin stories in the next volume (“Year One”). 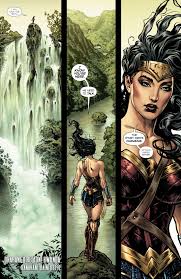 Greg Rucka and Liam Sharp are a fantastic duo on this book. Rucka writes Wonder Woman so well that you are intrigued and do no want to put the book down. Sharp’s art is fierce and flows well with what the story Rucka is telling.