See The First Trailer For The Hobbit: Battle of Five Armies 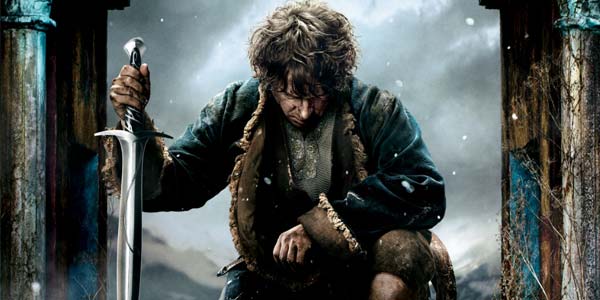 The defining chapter of the nine hour adaptation of a 100 page book will soon be upon us!

One thing I can absolutely credit to Warner Bros– they’ve been great about their post-Comic Con follow up. Sure, their panel didn’t include Josh Brolin wearing a toy Infinity Gauntlet and eating a flower, but they’ve shared a heck of a lot of the content that made its debut at the show.  First, they released the first look at Wonder Woman from Batman vs Superman… Then they dropped the incredible Mad Max: Fury Road trailer.  And now, here’s the first trailer to The Hobbit: The Battle of the Five Armies.

And while it lacks the buzz of Wonder Woman or the kinetic awesomeness of the Fury Road teaser, the new Hobbit trailer is still, well, not bad.  It’s obvious from this look that, even with a narration, our hero Bilbo will likely be getting sidelined in lieu of over-emphasized dwarf mythology, and made up elvish romance and huge CGI armies (which, to their credit, look way better than most of then squeaky digital effects of the Hobbit movies).

I don’t want to sound like I’m overly down on these movies… I’ll be there opening night for Battle of the Five Armies, for sure… but I feel that this will be just another overstuffed installment focusing on the wrong things.  And it’s a shame that it’s coming from the same guy whose Lord of the Rings movies were so absolutely incredible.

Let me put it this way– the huge, epic and sweeping final battle at the Black Gates in Return of the King… really all that was, was a distraction, a misdirect while the really important stuff– in the story AND the production– was happening with Frodo and Sam and Gollum in the fires of Mount Doom.  It was those characters that brought weight to the movie, in ways no CGI army ever could.  I doubt we’ll get anything near that level of drama in the final Hobbit movie, and that’s a shame, especially with talent like Martin freeman and Ian McKellan really giving it their all.

Here’s the trailer, so you can determine if I’m being too harsh on poor old Peter Jackson.  The Hobbit: The Last One hits theaters this December.