The First Trailer For The Martian Is Awesome 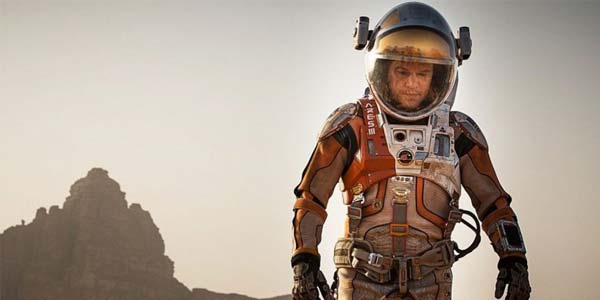 Get a first look at the big screen adaptation of Andy Weir’s outstanding off-world survival story.

I just started reading The Martian, and even a few pages in, I am already hooked.  Andy Weir has crafted a fantastic story in the grand tradition of great against-all-odds survival stories, with the protagonist Mark Watney relying on his scientific background and considerable wits to survive.  It’s a great read, and the unwavering optimism of our hero would make his tale compelling enough… but he’s also funny as hell, making his narration a total blast, even when he’s up against literally impossible odds.

That was my major concern about the movie adaptation of the story.  Yes, the cast is stellar, with Matt Damon as Watney, supported by the likes of Kristen Wiig, Jessica Chastain, Chiwetel Ejiofor, Donald Glover and Kate Mara.  And yes, the script was written by the great Drew Goddard… but director Ridley Scott isn’t exactly known for his comedy chops.

The first trailer for The Martian helped boost my confidence in the movie, because it definitely shares the same funny and often disarmingly breezy tone from the novel.  By the time Watney expresses his need to “Science the shit out of” his survival situation, I was sold.  Scott tends to be more interested in visuals than story in his movies, and considering how amazing he is at those visuals, if he’s relegated to simply making Weir and Goddard’s story look super pretty, we will likely all be better for it.

It looks like that is the direction they’re going, and that is absolutely great news!

Here’s the official synopsis of the movie.  I’d highly recommend checking out the book… I’ve been pretty awful at finishing novels lately, but I’m pretty confident The Martian will break that bad habit.

During a manned mission to Mars, Astronaut Mark Watney (Matt Damon) is presumed dead after a fierce storm and left behind by his crew. But Watney has survived and finds himself stranded and alone on the hostile planet. With only meager supplies, he must draw upon his ingenuity, wit and spirit to subsist and find a way to signal to Earth that he is alive. Millions of miles away, NASA and a team of international scientists work tirelessly to bring “the Martian” home, while his crewmates concurrently plot a daring, if not impossible rescue mission. As these stories of incredible bravery unfold, the world comes together to root for Watney’s safe return. Based on a best-selling novel, and helmed by master director Ridley Scott, THE MARTIAN features a star studded cast that includes Jessica Chastain, Kristen Wiig, Kate Mara, Michael Peña, Jeff Daniels, Chiwetel Ejiofor, and Donald Glover.