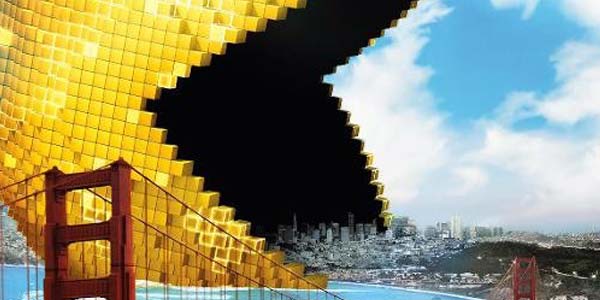 Is anyone surprised this is what we’re probably getting out of this movie?

There were slight rays of promise peeking through the Adam Sandler and Kevin-James-shaped shadows that hovered over Pixels, the new action-comedy about classic video game characters coming to life via an alien race, intent on destroying the Earth.  Maybe those rays are still present in Chris Columbus’ movie– I mean, it’s still got Peter Dinklage and Michelle Monaghan– but if so this trailer is certainly burying the lede.

Nope, what we get here are a whole bunch of big, interchangeable set pieces, each one starring a retro video game character whose name and game characteristics are literally dictated by a member of the cast.  Aside from these clunky lines of exposition, though, there appears to be NOTHING unique or special about the devastation wrought by any licensed character over another.

At least Kevin James gets largely sidelined here, in favor of the goofy effects on display.  I’m not the biggest fan of bloaty CGI, but I’ll take it over Kevin James any day.  Ho-hum.