Fall of Cybertron is More Than Meets the Eye 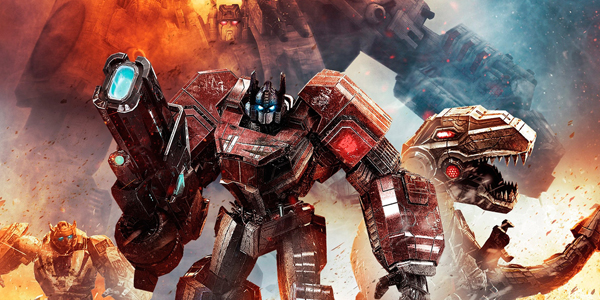 As hard as Michael Bay may try, you just can’t keep the Transformers franchise down.  Fortunately, after suffering through three abysmal movie tie-in games, 2010’s War for Cybertron knocked it out of the park with top-notch art direction and a story that did right by long-time fans.  Two years later, Fall of Cybertron picks up where its predecessor left off while improving on the prior game’s already winning formula in nearly every way.

The civil war depicted in War for Cybertron left the Transformers’ home planet battle-ravaged and uninhabitable.  If there was any hope for the Autobots to sustain the Transformer race, they needed to escape to a new star-system and seek a new home.  The Decepticons, however, vow to see the Autobots grovel before them or die — leading to the action-packed intro to Fall of Cybertron.  A well-implemented tutorial immediately begins and quickly gets you up to speed on the button layout as you take control of Bumblebee.  This and the twelve chapters that follow it guide players through a dark and expertly told storyline told from both the Autobot and Decepticon perspectives and filled with familiar faces from all ends of the Transformers Universe.  You’ll be able to take control of the likes of Optimus Prime, Jazz, Ironhide, Soundwave, Starscream, Jetfire, and several other fan favorites.  Even the powerhouse Grimlock makes a rather lengthy (and awesome) appearance in the game as a playable character.  While all the characters are modeled and rendered with significantly more detail than fans of the classic animated series and comics may be used to, they haven’t completely lost their identity as they have in the Bay films where every bot seems to look like a grey mess of metal and wires.  Quite the opposite here — every Transformer is given a distinctive look and personality coupled with their own unique special abilities and weapons. 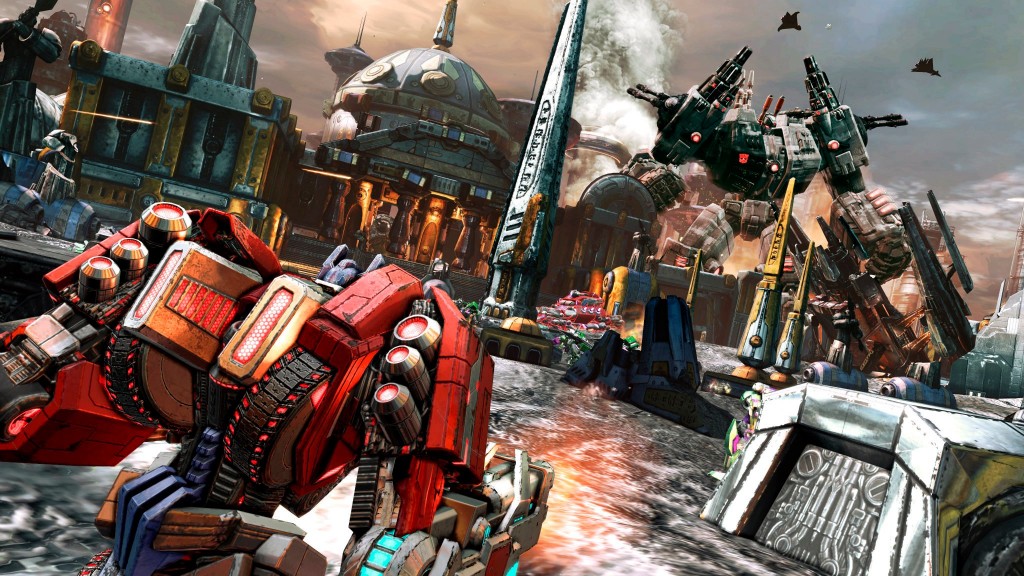 There were some immediate differences prevalent between War and Fall when I began playing and others that revealed themselves over time.  Right off the bat, the visuals and presentation are ridiculous with both the character models and environments being insanely detailed.  The Transformers themselves carry themselves with a believable agility despite feeling like they possess a mammoth weight.  Shifting in to vehicle form is a button click away and will send your character leaping into the air as hundreds of individual pieces move into position in an instant’s time, keeping the action seamless and fast-paced.  The lighting is also incredibly impressive from the get-go.  There are several instances I ran into where I’d walked into a room bathed in the eerie glow of a laser grid or filled with lighting effects so intense and cool-looking that it bears mentioning. 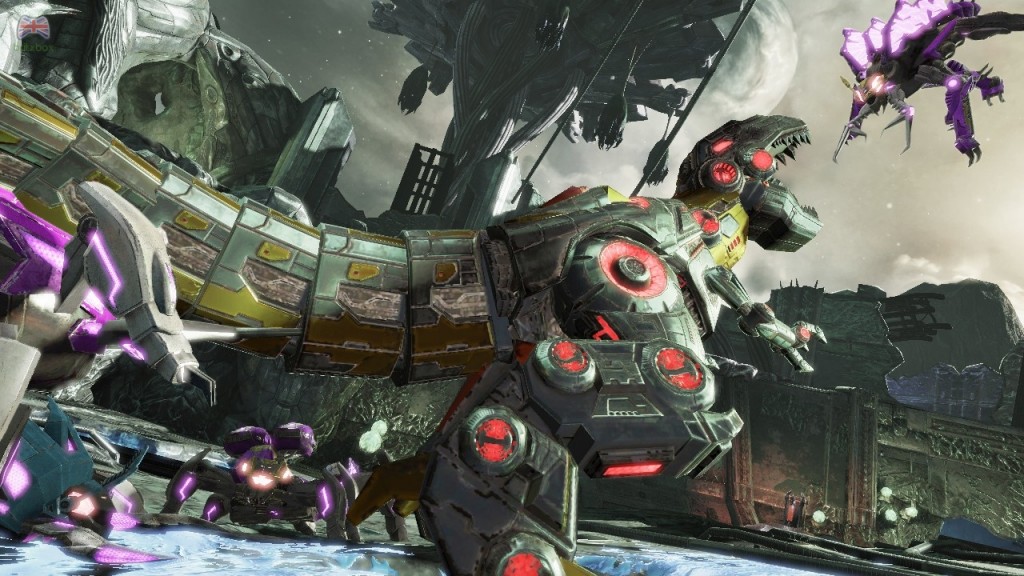 Where War ended up a bit repetitive towards the end due to its fairly consistent environments, Fall of Cybertron has such varied and interesting locations throughout that this never becomes an issue.  From urban cityscapes to the Sea of Rust and into the Instecticon Hive, the game keeps you on your toes and delivers it all without any mid-chapter loading interruptions.  Combine that with a narrative that has no shortage of huge, jaw-droppingly epic set-pieces and you have a recipe for success.  The first time you see the city-sized behemoth Metroplex transform to take the fight to Megatron, you will be officially hooked.  One area that some fans of the first game may miss though is the inclusion of campaign co-op.  The campaign is strictly a single-player affair this time around, but fret not, there are still plenty of online modes outside of the story and the game’s structure only benefitted from the omission.  Now, each level was designed specifically with only your playable characters in mind, allowing the developer to make a very deliberate and streamlined experience custom-tailored to each bot’s abilities.  In Fall of Cybertron, players are given levels that let you explore and have lot of fun with what each character has to offer.  Jazz has a grappling hook that allows for some great platform-y sections and Cliffjumper’s cloaking ability naturally lends itself to some awesome stealth-based areas.  Similarly, Starscream’s sections offer up some great aerial battles — it’s all about building an experience that lets gamers control these characters they way they always wanted to, making this by far the greatest Transformers game the franchise has seen to date. 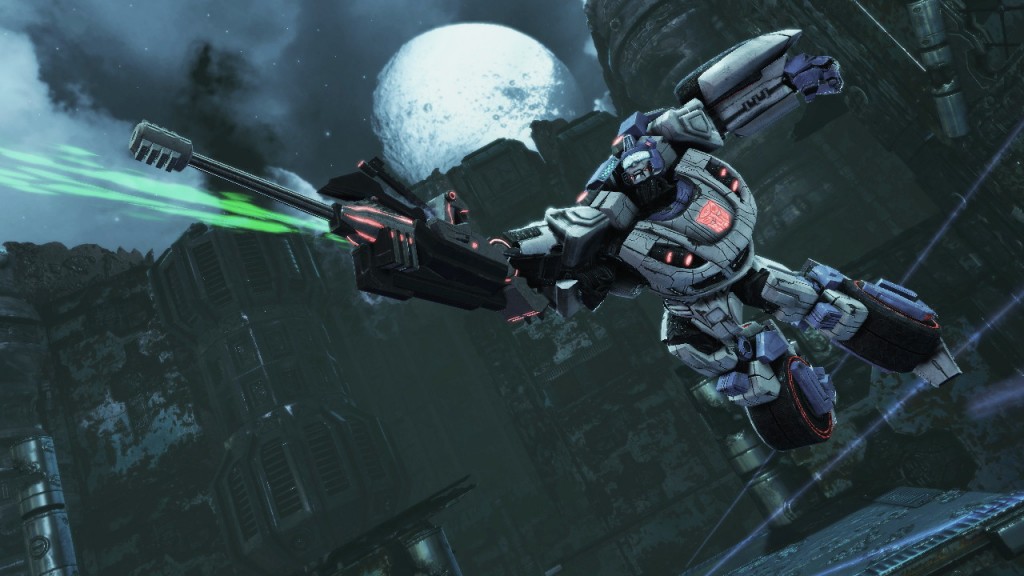 Basic combat is largely similar between all bots, with most having access to one weak weapon, one heavy weapon, and an inventory of one-time use items that can be acquired in-game.  More powerful characters like Grimlock and Bruticus are handled with a bit more simplicity as they are less agile but able to shell out a most satisfying level of destruction all the same.  One thing I love here that I wish more games would incorporate is a button that quickly switches which shoulder you are looking over.  Max Payne 3 also used this mechanic well and it makes all the difference in heated firefights, especially given that you cannot take cover behind objects. 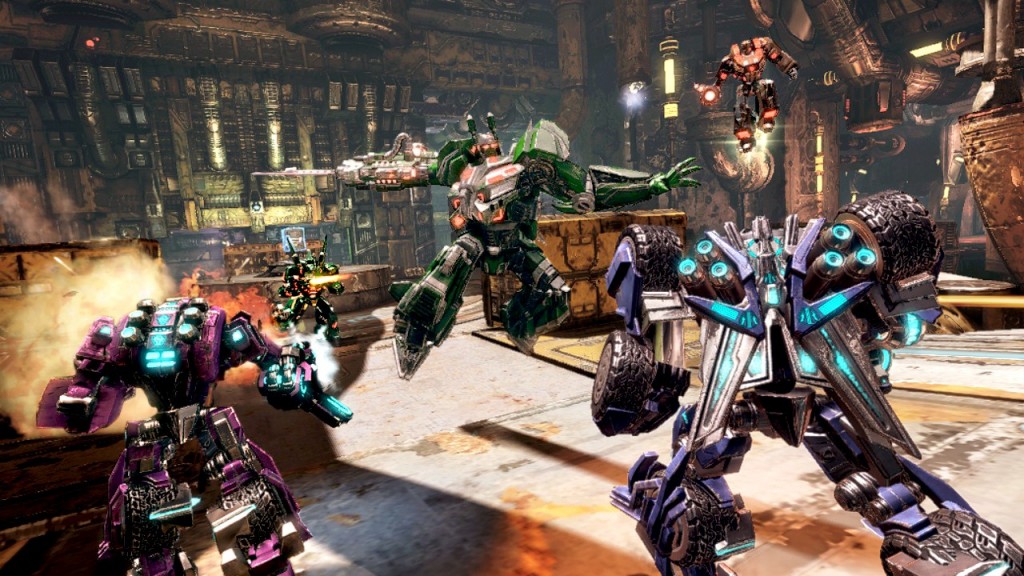 Speaking of firefights, Fall of Cybertron’s online suite is rife with killer modes that keep the action going long after the campaign is wrapped up.  Escalation mode is your basic horde-style match that tasks up to four players with surviving 15 increasingly difficult waves of baddies.  Lots of recent titles have been including similar modes, but the well-designed maps and reliance on solid team strategy here really make the difference.  It’s easily one of the best implementations of the mode I’ve played.  If cooperative multiplayer isn’t your thing, Fall also has you covered with four competitive online game types.  While the gametypes may be familiar, the nuances of playing a deathmatch with enormous death-dealing arm mounted cannons instead of the conventional weaponry found in most games keeps it fresh.  There is also a staggering amount of customization available to players provided you can earn enough Energon to earn the upgrades you’re looking for. 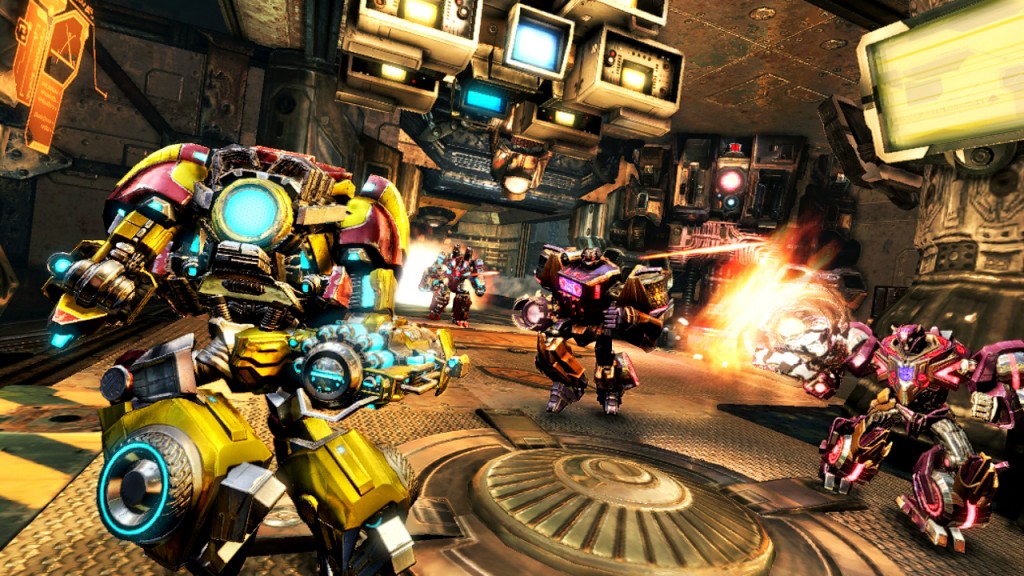 Developed by High Moon Studios, published by Activision and currently available for Xbox 360 and PS3, Transformers: Fall of Cybertron is a fantastic game by any standards — but the fact that it’s a fantastic Transformers game makes it a must-purchase title.  Seriously, this is the most fun I’ve had with the franchise since being a small child and facilitating epic battles between my Autobot and Decepticon action figures.  High Moon crafted a bold and exciting narrative that fans can really get behind as they get to experience first-hand the fate of the Transformers’ homeworld and their destined arrival in the Milky Way.