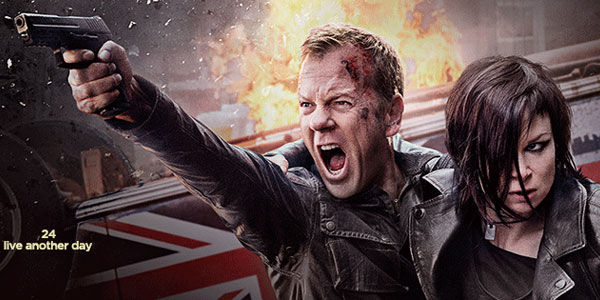 Jack is back, baby, along with all the good and bad which that entails.

Relatively speaking, 24 is not an old series.  But a lot has changed since it first hit the air, in regards to both television and the world at large, and those changes made the debut of 24 Live Another Day feel much more retro than I had anticipated.  I mean that in the most respectful way possible– along with shows like LOST and The Sopranos, 24 was one of the pioneers of the modern, cinematic style of television’s best, and while this series went off the deep end years before it finally bowed out, I can’t really blame it for being outshined by its successors.

So yea, Live Another Day definitely feels like a throwback to the even less-innocent time that was filled with post-9/11 paranoia and justifications for the atrocities inflicted on any potential threat to the “greater good” of National Security.  Like the Batman in Christopher Nolan’s Dark Knight movies, Jack Bauer strikes that perfect balance between steely, beleaguered super hero and Bush era post child, and being a big fan of the former it was a thrill to see him back on the small screen, with just as much gravitas and resolve and moral irresponsibility as ever.

The new story picks up four years after the show’s finale, which left Bauer officially an enemy of the state.  After a brief set up, we’re already back up and running, with Jack freeing Chloe O’Brian from a CIA black site torture chamber, and peeling back the first few layers of a cockamamie plot involving Snowden-esque computer hackers being fooled into overriding and weaponizing drones to murder the President.  As far as 24 MacGuffin plots go, this one definitely feels a little behind the times, which is perfectly in line with the reboot overall.  That sounds like a dig, but it’s honestly not– I found the attempts to connect this plot to real-world events more dumbly charming than pathetically stupid, and besides– it’s 24.  That means the initial plotline will be a long forgotten memory in about two or three hours.

While CTU has no presence in the new London setting, Bauer and O’Brian are still joined by some familiar faces, namely James Heller (now the President) and his daughter Audrey Raines (not a vegetable, and happily re-married).  The rest of the cast is rounded out by a team of CIA operatives attempting to stop both whatever vague terrorist plot is being hatched, while also apprehending Bauer, and O’Brian’s allies in their hacker collective, because why not?

If you can’t tell where I’m going with this, I’ll put it another way.  If you’re looking for the semi-credible, political thriller angle that made 24‘s first season actually compelling, you won’t find much of it here.  But what we get is worlds better than the awful final seasons of the show.  Live Another Day, for the time being, seems to have settled into a happy, cozy corner in the company of the series around Seasons 3 or 4.  The twists are more fun than eye rolling, and while Jack Bauer is obviously still a super human at this point, he’s at least one with feelings again.

It wouldn’t be 24 without a collection of dumb sub plots, and we’ve got some doozies planted early– the President has Alzheimers!  The CIA Agent’s husband was (maybe/ probably/ for the time being) a traitor!!  Audrey’s new husband is a controlling dick!!!– but you know what?  I don’t care; that’s part of the appeal of this show, and it was even back in the early, legitimately good era of the series.

Stylistically, it’s a thrill to see 24 back, looking and feeling as if it never skipped a beat.  We’ve got split screens all over the place, the ticking clocks and real-time gimmick already encroaching on story logistics, two very well executed action set pieces in the first two hours, and a perfectly-delivered “Dammit!” from Jack to the world at large.

I’ve been watching this show since the beginning, so I feel like I’ve got a good handle on its three phases– there’s good 24, fun 24, and bad 24… Live Another Day falls squarely into the fun category, and appearances by the likes of Yvonne Strahovski as our likely new hero, John Boyega as an Air Force pilot framed for terrorism and Michelle Fairley (Catlyn!!) as the first big bad of the season basically guarantee that I’m committing to this, come hell or high water.

In the over-arching world of modern television, 24 is one of the grandparents, the genesis of countless other, better shows that have come since.  And like any polite young man would, I’m perfectly happy paying it the attention it deserves, ignoring its bullshit, and being truly charmed by its slightly antiquated, fumbling nature.  It’s not Zero Dark Thirty, but it’s also not A Good Day to Die Hard… it’s 24, and Dammit– I’m glad it’s back!