5 Things That Made the FARGO Finale Spectacular 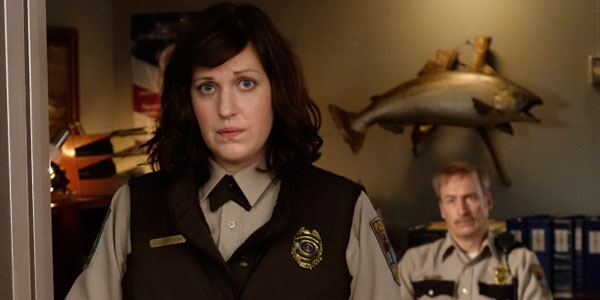 **SPOILERS AHEAD, FOR THOSE WHO HAVEN’T YET SEEN THE EPISODE**

All good things must come to an end, and in the case of the FX miniseries Fargo, it’s a really, REALLY great thing… so it makes sense that it would reach a really, really great end.  And did it ever!  “Morton’s Fork” delivered 70 minutes of pulse-pounding suspense, tons of the quirky/ existential charm we’ve come to expect from this Coen Brothers adaptation, and a send-off that did justice to the story in both a narrative and thematic sense.

There was a lot to love in this finale, but here’s five bits that made this final episode so outstanding, it motivated me to re-watch the whole darn thing from the top, as soon as the credits rolled.

The great Bob Odenkirk scored lots of laughs as the hapless acting Chief of Police in Bemidji.  His naivete and desire not to rock the boat made him one of the biggest roadblocks in Molly Solverson’s year-long investigation, especially when her evidence perpetually pointed directly back to Bill’s old high school buddy, Lester Nygaard.

It would have been easy to pass off Oswalt as a complete buffoon, but Odenkirk added a sadness behind his obtuse mannerisms– Bill isn’t an idiot, he’s a man out of time, holding onto the notion that his quiet town is forever nestled in the past where neighbors help one another, people are kind, and mass murders happen somewhere else.

He confesses it all to Molly in a beautiful scene, which sums up his character so eloquently, there’s no way to say it better than Bill did himself:

“Wearing the badge, seeing the things people are capable of, the inhumanity…  Whatever happened to saying good morning to your neighbors, and shoveling their walk, and bringing in each other’s toters?  It’s not the same.  I used to have positive opinions about the world, y’know, about people.  I used to think the best.  Now I’m looking over my shoulder… I never wanted to be the type to think big thoughts about the nature of things.  All I ever wanted was a stack of pancakes and a V8.”

4. The Best Coen Devil Ever

From mysterious drifter to horrifying force of carnage and terror, Billy Bob Thornton’s Lorne Malvo wound up being one of the most chilling and haunting villains in recent memory.  Last week, I posited that he had evolved into something more than just a bad man, becoming the latest devil surrogate which we’ve seen take shape in many other Coen Brothers projects.

What set Malvo apart from the sheriff in O Brother Where Art Thou or The Ladykillers‘ Professor Dorr, though, was exactly how unstoppable he was.  Up until the final moments of Fargo, I honestly was not convinced our heroes were safe from the danger Malvo posed.  I wouldn’t have been surprised if he wound up being the only one to walk away from this whole bloody affair in the end.

As if the silhouette of the killer with blood splatter wings in last week’s “A Fox, a Rabbit and a Cabbage” didn’t already evoke the notion that this guy was a fallen angel, his case full of audiotape confessions– including Lester’s frantic post-wife murder phone call– served as a great collection of souls Malvo had acquired in his reign of terror.

3. The Final Fate of Lester Nygaard

I still kind of want to say poor Lester.  We’ve seen many meek, corrupted men in the Coen’s universe (chief among them Fargo the film’s Jerry Lundegaard), and Martin Freeman did a great job of tapping into that middle ground right between sympathetic and just plain pathetic.

What made Lester unique, though, was the benefit of having more time to spend with him than most movie characters.  Mr. Nygaard’s descent started early, when Malvo got a hold of his tape confession/ soul (see above), but Lester’s arc wasn’t done after his string of bad choices as a frightened loser.  No, Lester figured out the angles, made it work, and became comfortable in his new, more sinister skin.

This was the key to making Lester so compelling– like Breaking Bad‘s Walter White, the writing is totally on the wall that this guy is doomed from the get-go.  But as his story progresses, Lester becomes so adept at self-interest and survival that it’s easy to question whether Hawley would actually let him literally get away with murder.  Even after the truth comes out about what Lester did, he isn’t captured cowering in a hotel room like his cinematic soulmate Jerry…  He’s actively escaping the authorities on a snowmobile.

Given time, who knows what evil Lester would become capable of– this is a guy who sacrificed both his brother AND his adoring second wife to save his own skin in situations he, exclusively was responsible for instigating– but as we all expected from the very first moment this sad, odd little man stumbled on screen, he’s not getting away.  And while Lester didn’t face the vengeance of Lorne Malvo or the justice of the police, everything he built himself to be melted away along with the literal thin ice on which he found himself standing.  Lester died as he lived– ignorant, afraid, and entirely as a result of his own doing.

2. The Death of Lorne Malvo

But while Lester’s death was the most thematically poignant, it wasn’t even the coolest!  I adored that Gus got to redeem himself by being the guy to finally rid the world of Lorne Malvo.  Granted, it wasn’t a fair fight– Malvo was severely wounded thanks to a bear trap set by Lester, and he was quite angry having been outsmarted by the formerly timid insurance salesman.  But when Malvo got back to his cabin and discovered an armed Gus, I still feared the worst for our former cop turned postal worker.

Unlike the predestined nature of Lester’s end, I really had no idea what arc would be in store for Gus.  His screw ups early in the story complicate matters, despite his best intentions, but even in light of his previous encounters with Malvo, I didn’t know if he’d have what it takes to pull that trigger.

But pull he did, unleashing a volley of bullets into the wounded killer.  And as great as Colin Hanks was, filled with equal parts fear and vindication, Thornton stole the scene, burning into my brain the look of pure hatred on Malvo’s face, his eyes fixed on Gus, his teeth gnashing like a starving animal about to attack.  By the time Gus puts the final bullet in Malvo, it’s obvious even he isn’t getting up again… but that look remains frozen on his lifeless face, a reminder that even with him dead and gone, evil will always be a part of the world.

I’ve said before and I’ll say again– the key to what made Fargo work so well was Allison Tolman’s driven, determined Deputy.  Molly didn’t get her guy in the end– Lester escaped before she could finally arrest him once and for all– but she did something much more important.  She made things right.

By discovering Malvo’s audio tapes, Molly finally lands the evidence she needs to prove Lester is guilty, but in the process she also exonerates his brother Chaz.  Thanks to Molly, Gus pursues his dream and becomes a mailman.  Bill Oswalt comes to terms with the fact that he’s not cut out to be the Chief.  And she even helps Agents Pepper and Budge find some short-lived redemption.

I find it refreshing that our hero’s biggest victories don’t come from a place of violence or opposition, but of help and understanding.  It’s a tough concept for a hero to pull off, but Tolman nails it, grounding Molly in a pragmatic realism, a wisdom that belies her young age and a strength clearly visible beneath her soft features.

Even more than the film, Fargo the series really is Molly’s story.  In a world where even a sleepy little Minnesota town can house monsters and killers and corrupted men, Molly serves as a reminder that there will always be good to counteract the woes of the world.  She doesn’t have super powers.  She doesn’t catch the bad guy (or kill the other one)… but make no mistake.  Molly Solverson is a SUPER HERO.

It’s a shame to think that Fargo is over already, but this series is so rich with small character moments and quirks and subtle nuances, I can already tell it will appreciate even more with multiple viewings.  Noah Hawley knocked it out of the park with this one, serving up a sequel/ adaptation/ tribute that more than measures up to the name of the Coen Brothers’ classic film.

Am I excited to go back to Fargo, again and again?… You betcha!