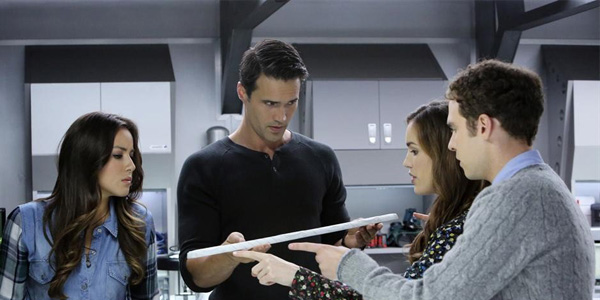 This week Thor’s world comes to the Agents of S.H.E.I.L.D.

The team is tasked with cleaning up after the God of Thunder defeated Malekith in Thor: The Dark World, and have to make sure nothing alien gets in the hands of the public. They get a call that an items has been found in a Norwegian forrest, and find out that those that took it are now wreaking havoc all over Europe. Coulson and his team head to Seville, Spain to find an expert on the subject, a professor Randolph. Coulson went to him when Thor’s hammer was found in New Mexico, and he is the leading expert on Norse Mythology in the world. Randolph helps them figure out the staff belonged to the Berserker warriors of Asgard, giving the holder immense power by channeling the rage within. They also learn the staff is incomplete and there are two more parts.

Randolph helps them find the second others, but tires to take piece one for himself. Ward tries to stop him but touches the staff and is filled with his darkest memories. While unconscious, Randolph gets ways but is stopped by the evil group and the second part of the staff is stolen. Through out the show Ward has to fight the rage inside, and we learn it comes from him not helping save some one stuck in a well as a child. He relives it over an over and it almost consumes him, Mae steps up to help but Ward refuses.

Coulson figures out that Randolph is not just a man but an Asgardain in hiding and the one who hid the staff on earth. They learn of the final piece and are able to track it down and take down the other group searching for it. The staff is taken into S.H.I.E.L.D. custody, but Coulson keeps Randolph’s secret.

Overall another mission with a lot a lot of depth. The shows are a fun extra to the Marvel Universe, but seem to be lacking. I hope after the fall hiatus and restructuring the show will find it groove and feel like more than a DVD extra.