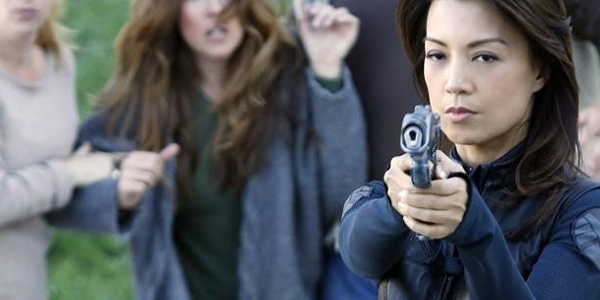 Is there a ghost haunting the Bus, or is it a young lady with powers who will take down the team? Find out on this week’s episode of Marvel’s Agents of S.H.I.E.L.D.

This week the team is tasked to investigate a woman with possible telekinetic powers. While they won’t use the word mutant, that is the vibe you get from Coulson when talking about the girl. They arrive to talk an take her in, but are surrounded by an angry mob of townspeople that want revenge for deaths they believe the girl caused. May takes her down with a tranquilizer, and bring aboard the Bus.

As they get to know the girl they realize that not her causing all the problems, she has no powers at all. accidents start to happen around the Bus, and the team realizes that is a ghost, or rather a man stuck between two plains causing all the issues. We get glimpses into May’s past this week, and see a softer side as she talks down the “ghost” and saves the day.

The episode was another freak of the week, without a lot of depth. The fact they can’t even mention Mutants worries the comic geek in me. They have announced officially that Quicksilver and Scarlet Witch will be in the next Avengers movie, which begs the question will they be genetic creations like Cap, or will they be the mutants they were born to be? It is those little things that make the show feel incomplete. Hopefully the show will turn around and polish the issues soon before the ratings drop even more.