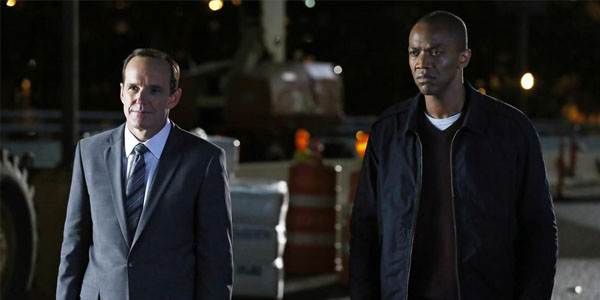 The Agents deal with a few familiar faces, and some of the bad guys plans start to come into focus on the newest episode of Marvel’s Agents of S.H.I.E.L.D.

The storyline that started in the pilot with Mike Peterson getting powers has come full circle. Peters is now in training to be an agent, and thanks to the night night gun the extremis in his body has stabilized. The mission this week is to take down a team of extremis soldiers created by the Centipede group.

While working on finding this rogue group it was revealed who the man was that the woman in the flower dress, Raina, visited episodes ago. His name is Edison Po and it turns out he is a killer, but not much else is known about him. Po and Raina are in contact with someone called the Clairvoyant, another mystery figure in the evil plan to make super soldiers. There is also a connection to Agent Amador, when the team finds another eye implant in one of the soldiers.

Through out the episode Peterson has to prove himself to the rest of the team, except Coulson. He is willing to accept Peterson as guy who needs a second chance. In the end Centipede kidnaps Peterson’s son and make a deal with him, Coulson for the boy. He keeps the deal to himself, telling the team that he will give himself up for his son. When they get to the meet the team is caught off guard when Coulson is taken instead, and a series of carefully planned explosions allow the bad guys to get away.

The show is off until the new year, but it was teased we will finally learn what happened to Coulson after the Battle of New York. I hope this will give the creative team some time to rework the show, because it needs a focus. It is lacking the excitement and use of the larger comic world, something that its competition, Arrow, seems to be doing very well week after week.