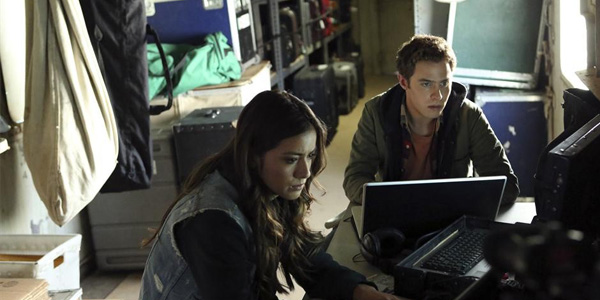 After a break the Agents of S.H.I.E.L.D. returned last week. The episode was full of action, and introduced a character comic fans might recognize.

After a long break the team is back, and the show seemed better. Maybe it was the break, but overall the episode seemed tighter, and the characters are starting to grow.

The team is on the hunt for Quinn, and they have tracked him to Italy. They set a trap on a train to track a package and take him down. All goes wrong when they are made, and the team is split up. For the audience the show is broken up in to three acts each showing what happened to each team. There is some over lap, but there was not a lot going on so it helped move the action along throughout the show. Ward and Coulson leave the train, after being chased off, and have to try to find out what happened. May is captured and tortured, but being the Calvery she escapes and meets up with Ward and Coulson. Fitz, Simmons, and Skye are left alone on the train to continue the mission. Simmons takes a Nite-Nite grenade to save the others, and it is up to Skye and Fitz to save the day. Some how they are able to track the package and find Quinn, all without being seen. They are alone, with no back up, and decide to take down the mansion full of bad guys with one gun.

While Fitz tries to disable the cars outside, Skye heads in the house to find Quinn. She heads down to the basement where she finds out just what was being transported on the train. She finds a stasis tube and inside is Mike Peterson, scarred and missing a limb from the explosion a few episodes back. Quinn comes in, captures Skye and wakes up Peterson to reveal the package. It seems the package is a new limb for the injured Peterson, who is now under the control of the Clairvoyant. With the same implant as Akela Amador Peterson has his orders, and with his new limb he is ready to go into the field. Peterson takes out the Italian team, and heads back to the States leaving Skye alone with Quinn. Quinn pulls the trigger and almost kills her, but the team arrive just in time and put her in status and capture the tech mastermind.

The episode moved very fast, and there seemed to be a different tone to the characters. The show was also full of comic refecnes. Stan Lee made a memorial cameo, Blonsky A.K.A. the Abomination was mentioned, and Peterson was given a code name Deathlok.

If this is the direction the show is going, it might just get better. And there is word that next Captain America movie after credit scene might have an impact on the show. Can Marvel pull it together and give us a show equal to their great movies?