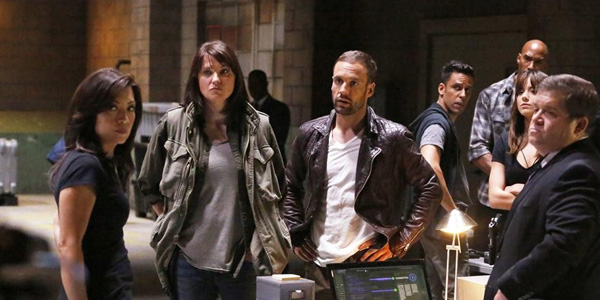 The second season of Agents of S.H.I.E.L.D. kicked off last night on ABC, delivering a much stronger show this time around.

S.H.I.E.L.D. as we know it is dead and Agent Coulson has been tasked by Nick Fury to rebuild… from the shadows.  Coulson has added to the team since the last time we saw him, and trained Sky to be much more than the resident hacker. It looks like she has been training with May since we last saw them, handling herself and weapons like a true agent.

Tonight’s episode focused on the new team structure, members, and a new group of villains. The team is trying to track down items that went missing after the breakout last year, and they have found some items from the origins of S.H.I.E.L.D., giving us a nice flashback/preview of the world of Agent Peggy Carter. It seems like a Hydra leader has aged very well, and is using Carl Creel to get more items taken from him by Agent Carter. The team worked well tonight– with Tripp become a full member– it all flows really well. Ward is being held in the new headquarters, deep in a cell, kept for intel on Hydra. He has had it, trying to kill himself, and is now willing to do anything to earn back Skye’s trust… but who knows if he will ever be a part of the team again?  Fitz is the worst off when the show ends, having brain damage from almost drowning last season. Throughout the whole premiere he is clearly struggling, but it is not until the very end that he shows a possible mental break, talking to Simmons who is not really there at the new HQ. She left to try to give him space to heal, but it just broke him.

The show is really working now, moving fast with plenty of action. The team has a great give-and-go, losing the feeling of factions within the team from Season One. Everyone is on the same page working for a common goal, even if that goal is still a little cloudy. Hopefully this team set up will not get changed around too much, because you can tell the writers and the actors are much more comfortable this season.