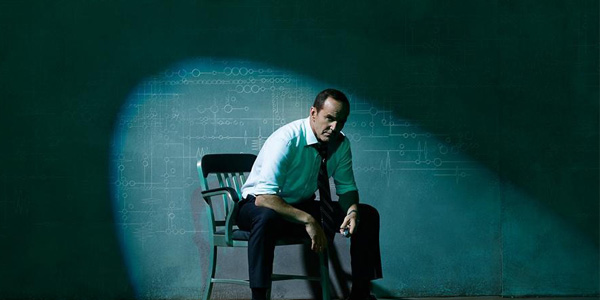 This week we find out more about the Tahiti patients on an all new Agents of S.H.I.E.L.D..

The secrets buried in the code Coulson and the others have been carving into people and walls has been reveal over the hour. It turns out the the code within the subjects is buried deep, and to control it Coulson had their mind wiped. Coulson thought he could hide them away, but the code kept coming back for some it was in art work, others models, and others carving it into people. We get to see Coulson’s struggle with the agents he hurt to bring back an Avenger, and why he fought to hard to die when it was his turn to be brought back. Throughout the show it appeared he was losing his mind, but by the end his obsession was ended when some of the others finished the puzzle. They turned the 2D puzzle in to 3D showing it was not a drawing or language, but a map of a city.

While half the team is out working with Coulson, the other half is on Ward’s tail. He seems at every point to be one step ahead of them, on a mission to get back some of what he lost. They attempt to track him, but he is able to spot them most of the time. It appears Ward is tracking down Hydra and leaving them tied up for his old team, but it can’t be that simple and he looks to have other goals. It was also fun to see some connection to the next phase of Avengers, because it looks like Ward might be after Strucker.

The season is shaping up pretty well keeping up a good pace, and building a great team.