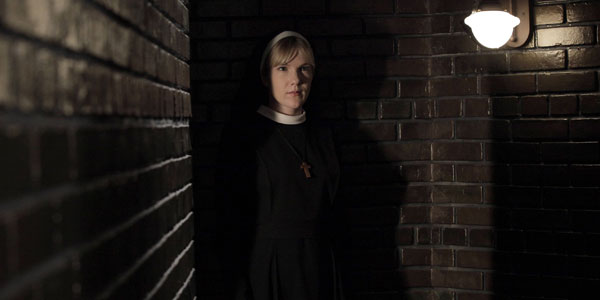 The new season of American Horror Story rages on with the same gale force as the Nor’easter outside the walls of Briarcliff Asylum… but with more sex, violence and missing body parts.

There was more than one moment in this week’s episode of American Horror Story Asylum that I found myself thinking “Oh, no– really? Again?” For the third straight week, our modern-day lovers get an intro sequence as they attempt to escape the grisly killer in the halls of the abandoned asylum, and for the second week in a row, the inmates of said asylum, back in the 60’s, attempt a breakout.  However while both of these repeated events seemed groan-worthy in their frequency, they both lead to some intriguing results that I did not see coming.

With a dire storm descending down on Briarcliff, Sister Jude plans to calm her inmates with a special movie night– Cecil B. DeMille’s The Sign of the Cross, no less– but no sooner does she make the announcement than strange mementos from the hit and run accident, which we found out last week left a little girl dead and Jude so guilt-ridden she fled to a nunnery, begin appearing.  The matron begins by interrogating the likely suspects who would dangle knowledge of her dark secret over her, but when both Drs. Arden and Thredson express no knowledge, her resurfaced guilt drives her right back to the bottle– in this case, a bottle of sacred wine.

Jude should be looking closer to home to find her accuser, as all signs point to recently demon-possessed Sister Mary Eunice as the culprit. I was curious how AHS would present their first possession, as the typical possession stories employ a slow burn as the victim’s soul is slowly consumed by otherworldly entities. In true AHS fashion, a slow burn is not part of the equation here, and Mary Eunice has made a fairly fast decent from ditzy good girl, to sultry and sinister trickster.  Mary Eunice seduces a dramatically weirded-out Arden, freaks out a majority of the inmates with a very different description of why they’re hosting a movie night, and covertly kills one of the residents of the asylum to feed the creatures outside. Lily Rabe is way more interesting in this villainous role that as a goody two-shoes nun, and her inhuman ability to get under people’s skin should make for a great ride as the season progresses.

With the weather beating down on the asylum and Sister Jude obviously smashed in her distress, Kit and Grace plan to once again make a run for it. Lana catches wind of the escape attempt, and after some deliberation, comes to the conclusion that Kit isn’t Bloody Face, after Dr. Thredson does some scouting and discovers Lana’s lady friend may have been the serial killer’s most recent victim.  The trio are also joined by Shelly, who teams up to break out during the pitch-black movie screening by citing “lady troubles” to the entirely disinterested guard.  The group navigates through the halls of the asylum, only to be stopped by an orderly, when Shelly decides to take one for the team and… distract him in her own signature manner while the others escape, promising to come back for her.

The three inmates actually make it outside the asylum’s walls this time, but unfortunately they don’t expect to encounter Arden’s creatures in the woods– as they discover them, we get our first real look at the things lurking in the woods, which appear to be mutated humans of some sort (I was secretly hoping for giant wolves).  So, botched escape attempt number two doesn’t really work, and the trio retreat back to the safety of the asylum unnoticed.  Shelly isn’t so lucky, as she runs into Arden, with a head full of rage after his trippy encounter with the demonic Mary Eunice.  Arden takes out his bevy of woman issues on poor Shelly, holding the escaped inmate captive in his lab after an attempted assault on her reveals he’s missing some… key pieces, that could go a long way in explaining his obvious psycho-sexual problems.  Shelly makes the mistake of laughing at Arden’s eunuch state, and based on the horrifying way Arden gets his revenge on her at the tail end of the episode, I fear the asylum’s resident nymphomaniac won’t get to see the Paris she dreams of.

I’m starting to wonder where they’re going with the present day bookends, and how this will connect to the 50-year-old tale that makes up the bulk of this season. This week feels like more spinning wheels, as Teresa is menaced by Bloody Face, only to be rescued by Leo (who has, thus far, survived a ripped off arm and multiple stabbings). The lovers reunite, only to be shot by two Bloody Face cosplayers (in a very Funny Games sequence)… but the two killers then run into the real Bloody Face. I’m guessing the modern story will shift to these two crazy kids now, as another week of Leo and Teresa turning out to be not-dead would be getting kind of silly. But then again, kind of silly is where AHS truly shines, so I guess I’ll just stay happily along for the ride. 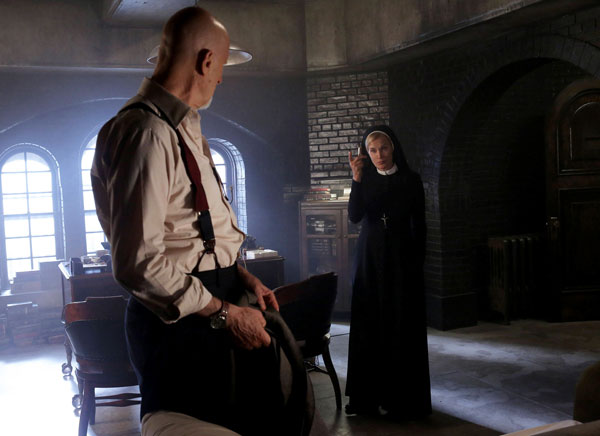