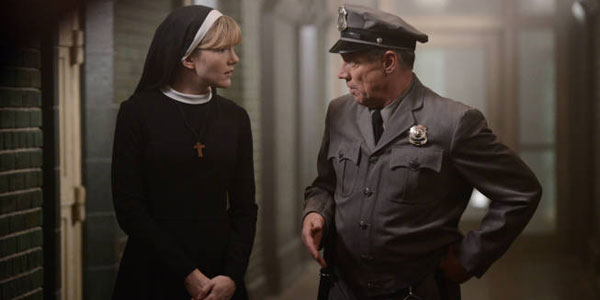 More plot twists! More insanity! And the angel of death?  Why not?!?

I had a feeling this was coming.  American Horror Story Asylum has been a pretty great time so far, but it’s still American Horror Story, which means things are bound to get completely over the top and kinda stupid.  We made it past the mid-season hump this week, and I can see the change coming fast.  “Dark Cousin” is loaded with inane plot twists and the sort of cyclical storytelling we saw a LOT of in Season One, leading characters right back to where they were weeks earlier.  Oh, and we also see a pretty notable death, and one I think the show will be worse for.

But hey– it’s one of those shows where you should always expect things to get silly very quickly, and you can either abandon ship or just go along for the ride.  And the ride is certainly packed with stuff, I’ll give it that.  This week we see Sister Mary Eunice put the smackdown on Dr. Arden, and it’s incredibly satisfying to watch the most awful human being ever get put in his place a bit (finally!), but as Mary Eunice continues her bid for control of Briarcliff, she is among the many (MANY) characters to encounter the angel of death (Frances Conroy, a welcome return from Season One), who literally kisses the life out of those ready to expire with her admittedly awesome looking black angel wings unfurled, cuz, y’know– it’s this show.

The dark angel pays a visit to poor, dying Nazi-hunting Mr. Goodman as well, only to be discovered by Sister Jude, banished from her post at the Asylum and desperately trying to escape Mary Eunice’s frame job, which makes her look like Goodman’s killer.  Amidst her frantic escape from the police, we get more of Jude’s backstory, and Lange is awesome as ever selling her post-vehicular homicide despair before crashing her car into a nunnery that would change her life for the next two decades.  Before the angel takes Jude, she realizes she has to admit her sin to the parents of the girl she murdered almost 20 years ago, but when she does, she discovers the girl is still alive and all grown up!

OK… I actually liked the twist a few weeks back that revealed seemingly nice guy Dr. Thredson as the unholy serial killer Bloody Face.  It was a genuine surprise, and one to which all the pieces made sense.  The reveal that Jude’s would-be victim did not die just doesn’t add up, what with all the newspaper clippings and flashbacks clearly indicating the little girl was dead.  Even if Jude was too emotionally wrecked to allow herself to follow up on the aftermath, how are those newspapers going to declare it a murder?  I guess we’ll find out eventually (hopefully).

Meanwhile, things take a bad turn for Lana (and us), after last week’s wonderfully creepy psycho-sexual interplay between her and Thredson devolves into a rather ugly rape scene this week, followed by Lana making her escape from Bloody Face’s lair.  Sadly, the guy who comes to her rescue on the side of the highway is just as demented, killing himself behind the wheel while the angel of death waits in the back seat.  The car crashes, and Lana winds up in a neck brace… back at Briarcliff.

But she’s not the only one who’s back at the Asylum!  Despite his death row maximum security holding, Kit also escapes his captors and returns to the institute in an attempt to rescue Grace, who is still suffering the brutal results of an alien-conducted hysterectomy.  Bless his heart, Kit makes it back inside, grappling with one of Arden’s polio/syphillis ridden super-monsters, and almost makes it out with Grace in tow… but they’re stopped by Frank the guard, who’s been ordered to shoot Kit on sight.  He shoots, but Grace blocks the bullet, and Kit becomes the last main character to see the dark angel, as she claims the life of Grace.

I will give the AHS team credit– I still have no idea where things are going over the next six weeks, but it seemed odd to yank Kit and Lana back into the Asylum in the same episode.  But back they are, and the show must go on… there’s a few plotlines that are really getting a bit long in the tooth, and while it was nice to see Arden get knocked down by the object of his affection Mary Eunice, I think I’m pretty ready for the foul doctor to be taken out permanently.  We’ve still got Thredson around as the likely big bad (especially with the previews showing he will also be coming back to Briarcliff next week), but seriously– with Grace and Goodman both gone, we’re running a little low on non-bad guys around the asylum.

What do you think? Are you still feeling this season?  Let us know in the comments.