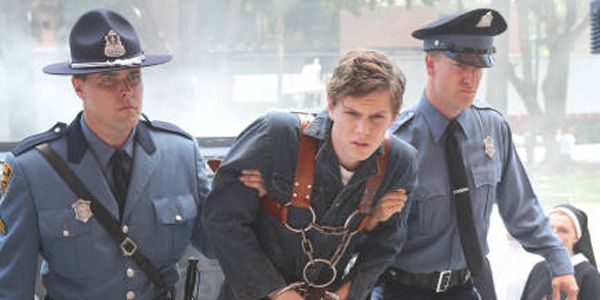 American Horror Story returns with not just a new Season, but a whole reboot of the series itself. Sorry, Harmon family… the inmates of Briarcliff Asylum are already way cooler.

American Horror Story is following through on an ambitious idea with the premiere of Season Two.  Instead of an ongoing storyline lasting multiple seasons, each new year will see a unique miniseries, featuring all-new characters, a different setting and a new storyline.  Season One saw the ghostly tale of the Harmon family in their newly-acquired “Murder House,” and Season Two flips us to the East Coast, and back some 40 years for “Asylum,” the new miniseries that will run for the duration of the sophomore Season.

The new cast/ new location/ new story arc isn’t news… it was announced months ago that this show would finally deliver on the lofty concept many have tried in years past.  Heroes was designed to follow a similar model before NBC went and mucked things up, and even co-creator Ryan Murphy’s Glee was intended to reboot the cast when they graduate (again, before network execs balked at the idea of losing their stars).  What surprised me about the new season of American Horror Story was that the style of the show changed immensely, as well.

There’s a lot of facets to horror as a genre, and American Horror Story has always been a show eager to mash them up into a duck press as often as possible, with nods and homages and atmosphere pulled almost giddily from the entire history of horror. I loved Season One’s EC Comics tone– it was campy and pulpy and more than a little bawdy, and had no problem getting grotesque at the drop of a hat. Season Two kicks off setting aside some of this Tales From The Crypt sensibility for a new story that feels more like a Stephen King novel, with a crazy mashup of alien abduction, serial killers, wrongful imprisonment and archetypical bastions of science and religion all appearing front and center in the first sixty minutes.

If you loved the trashy, shlock vibe of the first Season, don’t worry– there’s plenty of that as well. Arms are torn off, we get lots of talk about a serial killer who skins young girls alive, and we’re exposed to a copious amount of basic cable-grade nudity. If American Horror Story‘s first season was bawdy, the new season gets downright sleazy with the sex and gore on display from the first scene on, and I love it. 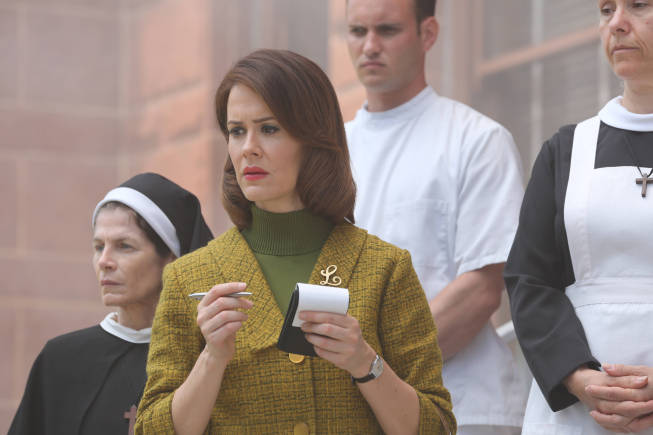 The first episode is called “Welcome to Braircliff” and it’s aptly named.  The episode clicks along at a steady pace despite the laborious task of introducing us to the large cast of asylum inmates, protagonists and villains in 1964, as well as bookending the episode with a modern-day horror tale starring Adam Levine, which takes place at the same asylum.

The protagonist so far seems to be Kit Walker (Evan Peters, so much cooler here than Season One’s Tate), a man seemingly wrongly accused to be a serial killer called “Bloody Face,” who is committed to the asylum under the dual care of cruel Sister Jude (Jessica Lange, in a wonderfully different role from the gloriously vampy Constance) and sadistic, probably-a-former-Nazi scientist Dr. Arthur Arden (an utterly despicable James Cromwell).  Kit experienced an alien abduction that left him blacked out and his new wife seemingly murdered, leading authorities to peg him as the killer on the loose, a story that piques the interest of an ambitious news reporter… which leads her to become incarcerated by Sister Jude as well… and that’s all in the first thirty minutes.  So yes, there’s a lot going on, in a series whose premiere season was virtually giddy about how many layers of story they could keep throwing onto the pile.

It worked for Season One, whose lunacy was part of it’s campy charm… and thus far the multiple stories being woven together to form the foundation of “Asylum” are working just as well.  I love that we get some sympathetic characters in this new season– one of the few things last year sorely lacked– but what I love even more is not knowing if this sympathy is rightfully founded.  Kit appears to be cut from the classic King cloth of innocent man, wrongly accused, but with the playfully sadistic mindset behind this series, it’s just as likely he’ll twist into a much darker path by the season’s end.  Likewise for some of the more charming inmates of Briarcliff, such as Lizzie Brochere’s Grace and Chloe Sevigny’s Shelley, it’s fairly obvious that at least one of these apparent victims will be revealed as something way worse than they seem… but half the fun of a show like this is wondering when and where it will happen.

With an A-list cast, a bold new direction, and the intriguing choice to go broad with the horror on display, I’m stoked to see where American Horror Story Asylum takes us.  Season One went from being a campy guilty pleasure, to a campy guilty pleasure that I absolutely dared not to miss. It looks like Season Two might just move past the guilty pleasure part of the equation, straight into “can’t miss” territory.