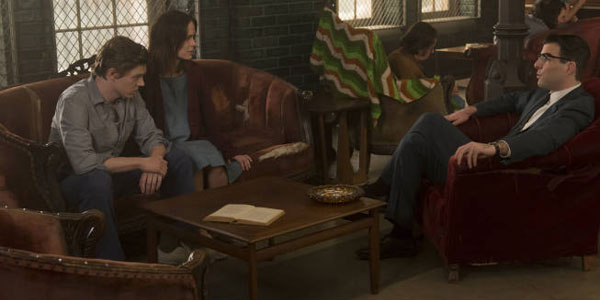 American Horror Story Season Two is coming to an end, so that means two things– it’ll get weird, and it’ll get disappointing.

American Horror Story Asylum has been a dramatic step up from the trashy and fun yet impossibly stupid first season, but the latest episode “The Name Game” is definitely giving me flashbacks to the half-boiled ending of the Murder House saga.  Lots of stuff happens this week at Briarcliff, but I was more than a little let down by the new turn of events.

For the second week in a row, we’ve had a fake-out death… first it looked like Sister Jude killed Leigh the psycho Santa, only to leave him with a neck wound.  Then last episode Leigh crucified the Monsignor, leaving the hapless idiot nailed to a cross, face to face with the angel of death.  But the asylum proprietor didn’t die, instead being commissioned by the angel to kill the demon inside Sister Mary Eunice, before her reign of terror over the inmates can continue.

While the weakened Monsignor tries to exorcise the demon from the innocent nun, Dr. Arden tends to Grace, somehow back from the dead after last week’s alien visitation, and now accompanied by a very verbose new Pepper.  The Nazi doctor is still trying to make heads and tails out of Grace’s miraculous return, and her mysterious pregnancy, and witnesses the birth of the child (Kit’s?) while existentially sparring with Pepper.  What’s real in all of this and what’s hallucination is starting to get blurry, but it’s clear that Arden is very much losing it.  Disappointingly, the way he expresses this anger is by executing all his monsters in the woods.  After setting these things up as such a threat, I can’t believe they’re throwing them away now– casually shot down one by one courtesy of Arden and his luger.

The trippiness is just beginning though, as Jude is targeted by Mary Eunice and subjected to electroshock therapy, which leaves her brain mush-ified as she leads a wonderfully bizarre musical number in her own head.  The titular “Name Game” is Jude’s song of choice, and despite the out of left field quality of the tune, the sudden shift in lighting and color and pacing, it actually works as a manic Twin Peaks-eque side story, doing a nice job of illustrating what the electroshock actually did to Jude’s brain.

Lana and Kit, meanwhile, run into Briarcliff’s latest hire- Dr. Thredson, who’s desperate to get his hands on the confession the pair of inmates taped last week.  When threats don’t work, Thredson focuses on Grace, forcing Kit’s hand to reveal the location of the tape to protect the baby that might be his.  But Lana was one step ahead of the killer, and switched the tape to a new location, which she promises Thredson she will never reveal.  Score one for Lana!

As the Monsignor continues his attempts to combat Mary Eunice, he realizes he’s not spiritually powerful enough to exorcise her, and at the behest of the brain-fried Jude, he opts to do the only thing he can– kill her instead.  He actually succeeds, catching Mary Eunice in a moment of composure, as the innocent girl struggles to hold back the demon, long enough for the priest to shove her off the balcony.  As she falls to her death, the angel waits to claim the willing soul of Mary Eunice… and somehow, also the demon.

This is where the episode falls apart for me.  I understand that they wanted a twist, “shock” death scene, but after establishing Mary Eunice as such a major big bad for the whole season, she is taken out very quickly and easily.  While I love the idea that Mary Eunice’s own innocence is what leads to the demon’s defeat, there’s a few problems here, dramatically.  First, the Monsignor is an absolute jackass, and having him be the hero here feels unearned.  I can barely celebrate the downfall of Mary Eunice after she is killed by this chump, instead of any of the myriad of characters the demonic nun has actually menaced throughout the season.

But the more damaging aspect of the death of Mary Eunice is that the scene with the angel of death breaks the show’s own rules.  Throughout both season of AHS, one thing I always respected was the dedication to establishing rules and following them to the letter– there were rules to ghosts, and all characters obeyed those rules.  Likewise, this season set up rules for the angel of death, that she could only take souls who were ready, but seems to contradict this as she takes not only Mary Eunice but the demon inside her, as well.  I’m hoping they explain this, because right now it just seems sloppy.

With one big bad down, I wasn’t really expecting we’d lose another before the end of the hour, but sure enough Arden’s demise finally happens, and it’s as anticlimactic as Mary Eunice’s.  The despondent doctor volunteers to be the one to bring Mary Eunice’s body to the crematorium in the basement, and in his grief he climbs on top of her corpse and burns alive alongside her.  If Arden had been a character with any shred of humanity, the scene would have played beautifully.  But this Nazi doctor, with all his schemes and inhuman experiments and sinister machinations has established absolutely zero empathy, so having him off himself in a furnace feels cheap– I wanted to see Arden get his comeuppence, be it at the hands of his victims in the asylum, or wind up on the operating table of the aliens, the mad scientist becoming someone else’s experiment.  Having him simply burn with his unrequited love was a let down, and this reprehensible villain deserved a better exit.

More than ever, I have no idea where Asylum is going now.  With Jude still scrambled (permanently?) and two of our main villains dead (it’d be hard to pull off a third fakeout, especially when they’re both locked inside the furnace as the credit rolled), it doesn’t feel like there’s three episodes of stuff to tie up anymore.  After all the great, Stephen King-esque setup or these forces of good and evil, the fact that it’s looking more and more likely we won’t see any kind of epic, biblical confrontation is a bummer, and letting go of so many great villains in a single week makes me wonder what the creators were thinking.  If an episode this sloppy reared its head early in the season, I might have jumped off the show. This late in the game I’m in for the long haul, but they’re going to have to do some explaining if they want to keep me invested until the finale.