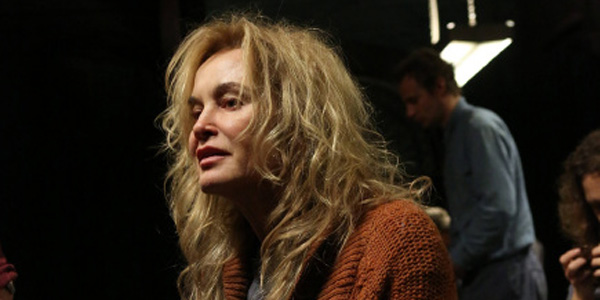 This season is certainly getting crazier in its old age.

Last week’s episode of American Horror Story Asylum seemed to wrap up quite a few storylines in a fairly neat and tidy fashion, but of course, with two episodes to go and it being, well, this bonkers show, that didn’t last too long.  “Continuum,” our penultimate installment of Asylum fast forwards us through the years after Kit, Grace and Lana escaped Briarcliff, and despite it’s boatloads of exposition it was surprisingly eventful and well paced.

The post-Asylum happenings of this motley crew are more unorthodox than I could have predicted– last week Kit and his new wife Grace returned to his home with their alien baby… only to find Kit’s other wife Alma waiting for him inside… with an alien baby of her own!  The solution for this bizarre extraterrestrial love triangle is to take a page from the Henrickson clan, and go full-on polygamist… I guess we should have seen it coming, what with Chloe Sevigny’s role earlier this season.  But rest assured, there’s not much “big love” to be had– Grace and Alma are each dealing with their abductions in very different ways.  While Alma tries to bury the ordeal, Grace is obsessing over it… trying to understand what happened, and coaxing information out of the possibly alien hybrid kids.

It doesn’t take much before Alma snaps, murdering her sister wife with an axe to Kit’s absolute horror.  The episode began with a bait-and-switch that made it seem like Kit was the killer, but as sad as I am to see Grace (once again) die tragically, I was relieved that at least Mr. Walker hasn’t turned evil.  A little weird and polygamist-y, but not evil.

We next catch up with Jude, still trapped in Briarcliff under a fake name, after the Monsignor faked her death to bury any lingering questions.  With Timothy moving out of the Asylum to assume the role of Cardinal in New York, I apparently couldn’t have been more wrong about a showdown between him and his former right hand.  And quite frankly I’m disappointed– the Monsignor proved time and again that he was vain, cowardly and more often than not, a total shit, and having him make a clean break to greener pastures is kind of a letdown.  I guess there’s one more week for things to go differently, but for now it seems Jude is the one doing most of the suffering still.

Years as an inmate have left the former nun losing track of time, who owns the Asylum (which the Church sold to the state) and even who’s alive and who’s dead.  A domineering new inmate with the face of the Angel of Death sends Jude spiralling even further down, and as always jessica Lange is a wonder to watch.  What it is about this trashy horror show that makes this celebrated actress shine is beyond me, but shine she does, underneath a nest of scraggily hair and shrouded in her crimson bathrobe. Jude takes care of business with her new roommate, discovering she halucinated Death’s face on the thuggish convict, but I have a feeling Jude and the Angel will meet again before the season closes.

We also catch up with Lana, several years after her ordeal with Bloody Face and Briarcliff.  She’s written her book (and even sold the movie rights!), and Maniac has become a smash hit– selling huge volumes and serving as an inspiration to unempowered women in the late 60’s. The former reporter has given in to her own fame, though, focusing on her celebrity status instead of her crusade to see Briarcliff razed to the ground.  She’s even compromised her own story, adding more horrors to her captivity under Thredson and shifting Wendy from her lover to a mere roommate.  The scene of Lana reading from her novel in a bookstore, being haunted by the fact-crying ghosts of her torturer and lover, was wonderfully done, a subtle and moving scene that illustrated how much she has changed over time.

Far less subtle is the repeat of that same notion, as Kit meets Lana at her book signing and challenges her refusal to help bring the Asylum down.  For some absurd reason, Alma was sent to Braircliff after murdering Grace, and died inside, leaving Kit alone to care for his children and plan to destroy the institution. Lana clearly feels guilty about not following through on her promise to end the Asylum, but she still refuses to help Kit.  As he leaves we wipe straight to modern day, as Johnny visits the same book store to acquire their signed copy of Maniac.  I’m guessing the finale will stick to real time from here on out, as the direct transition from Kit to Johnny suggests. The neo-Bloody Face posits his end game to the terrified book store clerk– he plans to hunt down and kill his mother, Lana.

I really liked this week’s installment, which did a wonderful job of cramming in a ton of setup while keeping the plot moving forward.  Ryan Murphy penned this one himself, and it was an impressive balancing act that never failed to entertain.  Some of the decisions totally left myself scratching my head (the polygamy stuff? Timothy getting away Scott free? Alma getting sent to Briarcliff?), but at this point I feel I’m deep enough into the story that small stumbles– especially in an episode this dense– are easy to shake off.

It’s clear “Continuum” is setting all the pieces into place for next week’s big finale.  Aside from the fact that it looks like things may be less anticlimactic than last Season, I can honestly say I have very little idea how there gonna end this.  And I think I like that.