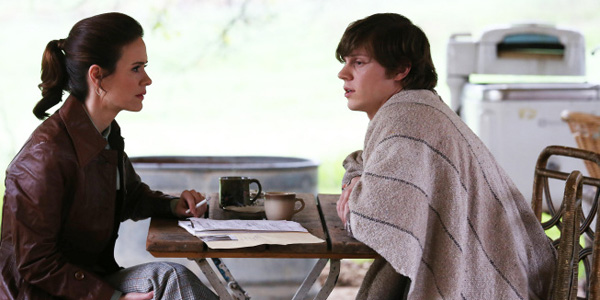 One of my biggest issues with the first season of American Horror Story was the lame ending, which, despite moments of greatness (mostly involving Jessica Lange’s vampy Constance) fell flat and felt very anticlimactic.  One of the biggest issues was, I never really felt invested in the Harmon family, so their fate wasn’t a big deal to me.  And the fact that they got an offbeat yet happy ending (sorry– spoiler alert, I guess) didn’t ring true to the story at all.

Asylum already corrected this storytelling flaw very early on– all season, I have been emotionally invested in Kit, Lana and the rest of our cast, and through all the ups and downs (mostly downs, actually) I really wanted to see them make it out alive.  Last week’s “Continuum” bridged much of the gap between the early 60’s Briarcliff days and the modern day, as the son of Bloody Face, Johnny, began his own killing spree in his dear old Dad’s honor.  The season ender, “Madness Ends,” continues bridging the two storylines, finally merging them completely together for the big showdown between the elder Lana and her spurned maniac son Johnny.

But I guess that’s jumping ahead– before their final confrontation, we catch up with the modern day Lana, who, inspired by Kit’s words all those years ago, decided to become the crusading journalist she fancied herself, exposing the horrors of Briacliff and following it up with a lifetime of journalistic avenging.  Her history is framed in an interview before she is to receive another lifetime achievement award, as she chronicles the story of how she set about taking down the corrupt institution, and its equally corrupt former monsingor Timothy Howard.  It was satisfying to watch Lana finally conduct her shocking expose, but the real victory here was her short but powerful face-off with Howard.  I was genuinely afraid the narcissistic priest (now a Cardinal in New York) was going to get away scott free, but Lana wouldn’t have that.  Knowing that the truth has been exposed and he will soon be outed as the bastard he is, Howard commits suicide, a move Lana (and me!) have little sympathy for.

The rest of Lana’s memoir involves her run-ins with Kit, who really earned the happy ending he got– The decent guy was eventually able to move past the deaths of Alma and Grace, and be a great father to his gifted alien children.  Kit gets to go on and live a long, fulfilling life with a new wife, and even takes in Jude after rescuing her from Briarcliff prior to Lana’s shutting the place down.  It’s funny– all along I thought Jude would be the hero of the story, but she remained broken by the institution she once devoted her life to.  Lana is the one who stepped up to the plate to bring an end to this twisted insanity, but much like Kit, Jude truly earned the peace she received under Kit’s roof, before the Angel of Death finally took her, at Jude’s request.

Even better, Lana gets to stay the hero in the present, as she finally faces off against her demented son, whose intention is to kill her in cold blood. But after a stirring dialogue about why she gave him up and how he became who he is, she closed the loop for good by shooting him in the face.  I never thought Lana would even make it to the end of this story, so it was surprising– and surprisingly fitting– for her to be the one to end the story.  And while it was light on scares, this ending was remarkably satisfying– evil was defeated, while the characters who deserved a happy ending got one.  The overall package wasn’t as neat and tidy as Season One (Kit’s mysterious, alien-associated exit was perfectly open ended), but it was just as happy… except this time out, that happy ending felt completely earned and welcome.

I’m going to miss Asylum, and the fantastic cast of characters we’ve followed all season. This story felt like an impossible improvement over the first season, and it has me hopeful that Murphy, Falchuk and their team have perfected the formula for this series.  The scares and gore and atmosphere are important, like any horror story… But like only the best of them, the core of the tale needs to be compelling characters, ones we can get and stay invested in.  I was absolutely invested in the inmates of Briarcliff, and if AHS Season Three can feature characters this good, and this interesting, it will absolutely be another must-see series.