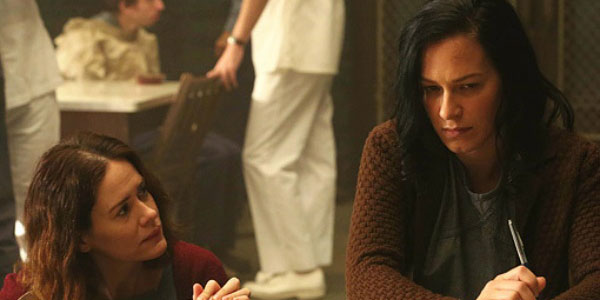 Aliens! Crazy inmates!  Serial killers!  And now, Nazis– Why not??

American Horror Story Asylum keeps moving forward, and in expected style Ryan Murphy and his crew just keep piling stuff on.  Fortunately this season, it’s still working to their advantage, and “I Am Anne Frank,” the first of a multi-part storyline, is probably the best installment of the show yet.  It is without a doubt the most well-paced, laying off on overly expository character introductions for the sake of keeping the multiple plotlines inside Briarcliff Asylum going at a decent clip. In fact, this is the first week we stay in the 60’s for the entire episode, as the Lovers’ subplot which has framed the intros of the last three weeks, is snubbed entirely (and honestly, not really missed, since it has barely hinted at an association to the main plot from 50 years earlier).

One thing that makes this season of AHS very compelling are the sympathetic leads, who pulled off the amazing task of making us care for them in their intro’s just a few weeks ago. I’m totally invested in Kit and Grace, and they share lots of time (and some kitchen counter canoodling) this week. I figured Grace would be the one of our leads who, it turns out really did the crime for which she is imprisoned, and this week we find out that, yes, she did murder her family… although her sexually abusive father did have it coming. It’s sweet that the truth about Grace got out and Kit still cares about her, to the point that the two totally do it on a metal kitchen counter… until they are caught and threatened with castration by the increasingly unpredictable Sister Jude.

Jessica Lange as Jude has been a wonder to watch, as she’s probably the most layered and mysterious character we’ve seen this season. Lange’s performance is nowhere near as showy as her vampy, wonderful Constance from last season, but she has an uncanny ability to range from detestable to sympathetic to antagonistic, to someone you really want to root for– all in the same 43 minutes. There’s a lot of that, although most of this week made me feel for Jude, who’s still dealing with the ghosts of her past, and her recent fall off the wagon, while she begins to discover the truth about the vile Dr. Arden. Despite her best attempts to reveal the truth about Arden, the Monsignor shows his true colors in his covert attempts to protect the doctor.  Arden is, in fact, being investigated all over the place, and no more than four weeks in, I’m already eagerly awaiting the mad doctor to get his comeuppance.

Local police are also looking into Arden after a report is filed by the prostitute he roughed up in “Tricks & Treats,” while a new inmate recognizes him from her (supposed) previous life… in a concentration camp in Nazi Germany. The newcomer (the always-wonderful Franka Potente) claims to be Anne Frank, who somehow survived her grueling Holocaust experience, and has the forearm tattoo to back up her claim.  It’s a mystery whether Anne really is who she claims to be, or if it’s all in her head, but on a show that gleefully features historical cameos wherever they can, I wouldn’t be surprised if they posit that the young girl did actually survive beyond the events of her diary.  The new inmate, whoever she really is, gets the drop on the diabolical doctor, but just when she is about to put him out of everyone’s misery with his own gun, she runs into poor, legless Shelly, the latest grotesque victim of the apparent former Nazi scientist’s experiments.

The other major focus this week is the increasingly strong relationship between wrongfully-imprisoned Lana and the perpetually decent and rational Dr. Thredson.  The psychologist has begun to genuinely care for the victimized reporter, and has made it his mission to get her out of the walls of the Asylum.  He’s as determined to make this happen as Lana herself, to the point where the pair embark on a series of ghastly therapies to “cure” Lana’s homosexuality.  Thredson doesn’t believe in these brutal tactics, and Zachary Quinto does an amazing job of showing the torment inside the doctor as he subjects this poor woman to tactics they both know won’t do anything but torture her. When his guilt and her suffering go too far, Thredson calls off the barbaric treatment, he still vows to make sure when he leaves the Asylum next Friday, Lana will be going with him.  It’s pretty obvious that plan won’t go through, and Lana’s not leaving anytime soon– but I’m curious if Thredson will stay, and where his genuinely virtuous character will go as the season progresses.  He’s proved to be the only decent human being among the Asylum’s authority figures, and with the noose around Arden beginning to tighten, is it possible Thredson will take the place of the Nazi as Briarcliff’s resident doctor, in an effort to end the horrors he’s now seen firsthand?

AHS has never been a very “A to B” kind of show, so even if it continues to look like that’s the course of the story, it could change in any number of ways, most of them probably sillier and campier than imaginable.  But through all the twists and turns so far, the Asylum storyline is still plenty watchable, with Kit, Grace, Lana and Thredson genuinely empathetic characters I care about way more than the Harmon family, and just the right balance of camp, scares and character moments to tell a much more compelling tale than anything we saw in Season One.