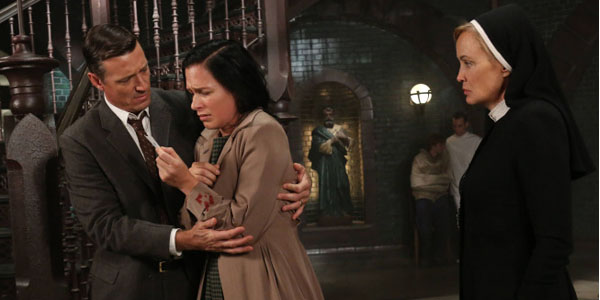 Did that really all just happen in one episode?

“Men are never gonna accept a woman in charge, especially not a woman as strong as you are. In my opinion, you never really had a chance.”  So says Frank the security guard to the dejected Sister Jude as Briarcliff’s matriarch is set up and screwed over this week, one of several victims of the cruel men that dominate the world of American Horror Story Asylum.  There’s a lot of the good guys (and specifically, good girls) being oppressed in this week’s “I Am Anne Frank Part Two,” even more so than the previous four episodes.  Mysoginistic control has been one of the stronger, yet seat-squirmingly uncomfortable themes on display this whole season, but this week’s game-changer of an episode leaves every one of the decent– and seemingly decent– characters in considerably worse shape than they were in last week.

Arden milks his gunshot wound to his full advantage, threatening Jude with prosecution, causing her to give up her crusade to dig up his past, and exacting his revenge on Anne Frank, who’s actually a postpartum housewife named Charlotte, via a devastating lobotomy scene that leaves her a blank Stepford Wife. With Anne’s real identity used to discredit Sister Jude, the asylum’s matriarch loses her confidence, retreating from Arden and back into her old lifestyle complete with cigarettes, booze, lipstick and a strange man’s bed. The tragedy here is, while Anne wasn’t the historical figure she claimed to be, she was still right about Arden– with any luck Jude’s new ally, Nazi hunter Mr. Goodman will keep following the wicked doctor’s trail while Jude (hopefully) regains her authority.

Jessica Lange has been excellent this season, and Jude has been an uncannily sympathetic character.  I can’t believe this is the same person who, just last week, ordered the castration of two of her inmates– there’s a hope in the sometimes cruel Jude that isn’t there in the more sinister figures of power in Briarcliff, and I very much hope if/ when she returns to the asylum, this hope will rally others to her against the villains.

Speaking of villains, the biggest twist this week– one that I absolutely didn’t see coming at all– the kind, virtuous Dr. Thredson turns out to be Bloody Face!  Thredson makes good on his promise to get Lana out of Briarcliff, but little does she realize she’s going from bad to worse.  Leaving the asylum, Thredson takes her back to his home, where she quickly realizes something’s not right… after a failed escape attempt, she winds up shackled in the doctor’s basement next to the frozen, toothless corpse of her girlfriend Wendy. I figured things wouldn’t look very sunny for Lana, but I totally did not see this coming– she’s clearly in a world of trouble, and poor, mutated, legless Shelley proves Briarcliff isn’t exactly big on tracking down their missing inmates.

Speaking of Shelley, her tortured existence should have been the damning evidence needed to nail Arden, but Sister Mary Eunice saw to it that she was removed from the Doc’s lab.  She poses it as a power play– with Jude on the way out Mary wants her role, working side by side with Arden.  In reality, I think the demonic sister has more anarchic plans– rather than put Shelley out of her misery, she apparently leaves her at a school, to scare the bejeezus out of a class of kids and their teacher.

Kit and Grace aren’t faring much better than their fellow asylum denizens, either. Locked in solitary confinement, the two share a very sweet heart-to-heart as they await their sterilization operations. Kit is spared at the eleventh hour by Jude, but while he gets to keep his pipes intact, Thredson tricks him into recording a point-blank confession that he is the serial killer.  Having framed the boy for his crimes, Thredson has no hesitation about turning Kit over to the cops before he departs the asylum, and Kit is dragged away in handcuffs.  Grace doesn’t end up on Arden’s operating table, either, though– she gets abducted by the same aliens that took Kit’s wife Alma. The two women meet in the otherworldly operating room, as Grace is subjected to some bizarre reproductive operation that leaves her a bloody mess when she returns to Briarcliff.

I expected at about the halfway mark of the season, American Horror Story Asylum would just go batshit crazy– they beat me by a few weeks, because this week sees virtually every character’s arc change drastically.  What surprises me even more is, while these changes are no good news for the characters, they’re actually very interesting, and I admit to now having no clue what happens next. The disorienting feel is accentuated this week with some expert direction by series veteran Alfonso Gomez-Rejon, who employs everything from bizarre camera angles and fish eye lenses to extreme closeups and an odd theramin-style score to make the proceedings as strange and uncomfortable as possible– the flashbacks to Charlotte’s pre-Anne Frank existence, framed in a boxy old TV with a hyper-saturated, technicolor pallet, is a surreal stylistic choice, but one that speaks to how alien this world is for the young woman who’s now so convinced in her own world.

Dark stories can be great, and Asylum is certainly keeping things as pitch-black as they can. I doubt this story is working toward an actual happy ending, but I’m really hoping we get a few cracks in the darkness– I’m getting more and more invested in these characters, and between Kit, Grace, Lana and Jude, I want to see one of the victims come out on top.  We’ve already lost Shelley and Anne (and Thredson, kind of)… I think one of our decent people really needs a win sometime soon. 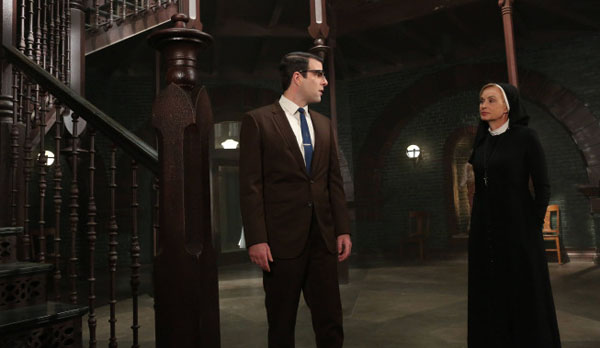