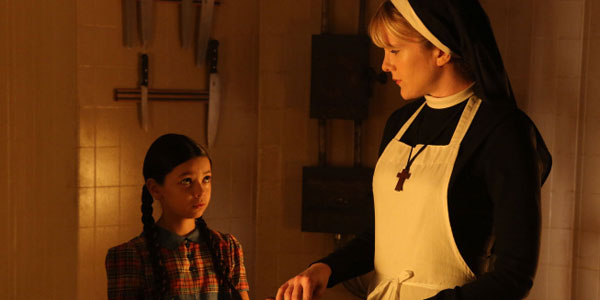 Most shows would follow a game-changing episode like last week’s “I Am Anne Frank Part 2” with a quiet week, one that lets the audience catch their breath after the barrage of plot twists and game-changing events that went down. But American Horror Story Asylum is not like most shows, and the rollercoaster ride continues this week with an installment just as strong and full of great moments.

With Grace bleeding out after her alien abduction, Kit on his way to the electric chair and Lana held captive by Dr. Thredson– revealed to be the serial killer Bloody Face– “The Origins of Monstrosity” switches the focus off many of our main characters to focus on Sister Jude, Dr. Arden and Thredson himself, as we learn a lot about each tortured soul.

Everything Thredson has done so far, from tricking a murder confession out of Kit to his focus on Lana, has been building to his end game, revealed this week– the demented doctor is a bundle of mother issues, based on his own mom that abandoned him and planted the seeds early for the psychotic killer of women.  He paints his own backstory to the captive Lana, along the way revealing she’s not intended to be another one of his victims, but the mother surrogate he’s been yearning for all along.  The scenes between Zachary Quinto and Sarah Paulson are very strong, classic psycho killer stuff as Lana plays to Thredson’s twisted desires as a cover as she attempts to free herself from her shackles.  When her escape doesn’t work, she opts to give him exactly what he wants in an effort to not become the doctor’s latest victim, staying her fate for the time being.

Meanwhile, Sister Jude is given a ray of hope after having her faith crushed last week– Nazi hunter Mr. Goodman has confirmed that Dr. Arden actually was a fugitive Nazi scientist… all he needs is a fingerprint to confirm, which he tasks Jude to acquire.  That won’t be easy, though, as Arden has no plans to be caught, or run away as Goodman warns he might.  One of Arden’s most recent test subjects, Shelley is on her deathbed, given last rites by Monsignor Howard.  The priest recognizes the poor victim of Arden’s cruelty and confronts the doctor about it, after finally putting Shelley out of her misery by strangling her with his rosary(!!).

Arden and the Monsignor’s past is revealed, another facet of the episode’s origin premise– When the Monsignor took over Briarcliff, he allowed Arden to continue his tenure at the asylum, and agreed to look the other way while the mad doctor conducted his experiments on the wayward souls trapped in the institution.  Howard drank Arden’s Kool Aid pretty quickly, believing at first in the doctor’s claims that through his awful experiments, he was going to change the world for the better, to create a new breed of human.  The Monsignor has been one of this season’s more enigmatic characters, but he shows his true colors here– a man of ambition, Arden’s claims that their collaboration could escalate him to the Vatican are music to the young priest’s ears.  While it’s evident that is not Arden’s intent, the Monsignor shows his cowardice matches his ambition– when he confronts Arden, the doctor threatens to take Howard down with him, prompting the Monsignor to bow to the former Nazi and banish Sister Jude from Briarcliff.

Jude has one more play before she laves the asylum, and manages to get Arden’s fingerprint for Goodman.  Unfortunately, Sister Mary Eunice beats her to the Nazi hunter’s hotel room and kills him, leaving Jude to discover his bloody, dying body as he tells her who did this.  Mary Eunice gets a few more great scenes this week, as she continues her campaign to become the asylum’s new matriarch.  As she talks with Arden, and the little homicidal newcomer to Briarcliff Jenny Reynolds, we are shown that the darkness in Mary Eunice may not stem exclusively from her demonic possession, as she has her own demons from the past as well.

With Jude stripped of her power and the Monsignor neutralized by his own cowardice, there’s nothing to stop the reign of Arden and Mary Eunice in a new, even darker Braircliff.  Dark times are clearly ahead for the inmates, as well as Kit, who has discovered Thredson’s plan was to frame him all along.  But with the young man trapped in prison on death row, how he can do anything about this is beyond me.

We also return to the present day for the first time in three weeks, and it was a good return, one that starts connecting the seemingly-disconnected plot to what’s going on in the 60s.  The police discover the bodies of the Bloody Face copycats that shot the Lovers, along with Leo’s body… but Teresa is nowhere to be found.  The cops show up at the modern day Briarcliff after getting a phone call that puts another piece of the puzzle in place– it’s Thredson on the line, describing his murder of the copycats.  While this doesn’t connect A to B, I find it interesting that this scene suggests Thredson is still alive in the modern day, and still pretty murder-happy despite his clearly advancing age.  The episode ends with the reveal that Teresa has been kidnapped by Thredson, the latest in his terrifying litany of victims apparently dating back over forty years.  After last week, I had no idea what I’d be walking into in this week’s AHS, and I’m very pleased to say after another week, I still have no idea what’s going to happen next.  That’s a great feeling, especially for a scary  story, and I really hope the team behind this series can keep this momentum going for the second half of the season. 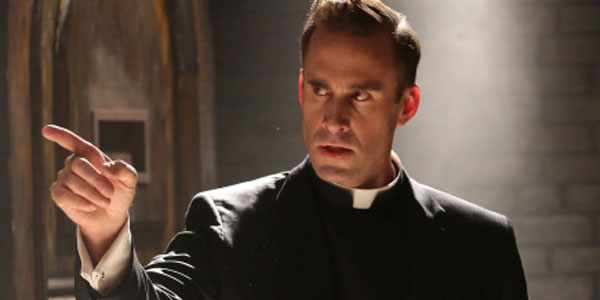