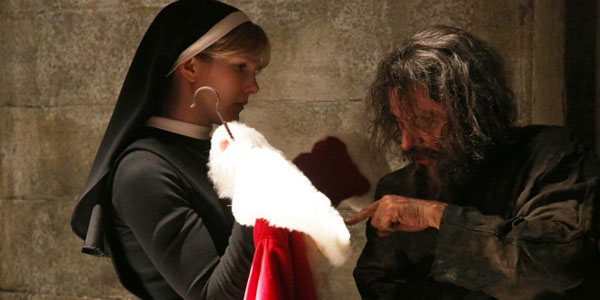 Christmas comes to Briarcliff, along with guest star Ian McShane, for a delightfully weird and creepy Holiday episode of American Horror Story Asylum.

I was a little underwhelmed by last week’s AHS, which seemed to work extra hard to simply bring characters back to where they had been earlier in the season, so this week was a wonderfully refreshing departure from all the setup and pawn-placing.  Things stay very seated within the Asylum this week, as Sister Mary Eunice decides to bring back a Christmas celebration for the inmates, something Jude had cancelled for reasons we soon discover.

But Mary Eunice isn’t throwing her Christmas party for the sake of the season– it’s part of her power play as she exerts her new control over the inmates– forcing them to donate dentures, hair, or anything they have to be makeshift ornaments– as well as Dr. Arden, whose misogyny is still making him very uncomfortable being a subordinate to the unpredictable and dangerous Mary Eunice.  The Christmas cheer at Briarcliff also catches the attention of the Monsignor, who admires Mary Eunice’s motivation and resourcefulness.  The Monsignor, of course, is at this point the only one dim enough to not get what’s going on with Mary Eunice and her demonic possession, but we knew that weeks ago, after he casts Jude out as matriarch.

For her part, Sister Jude is taking matters into her own hands, in an attempt to stop Mary Eunice, or at least the creature inside her.  Her first ambush doesn’t go very well, leaving Jude escorted out by security.  This leads her to scheme with her nemesis Arden to stage a coup and remove Mary Eunice from power.  The team up of Jude and Arden seemed preposterous– these two are such opposing forces, with so much hostility set up in the first half of the season, it just didn’t feel plausible.  Of course, as quickly as I realized that, Arden showed his true colors, setting Jude up for the benefit of Mary Eunice.  The set up which saw Jude get the crap kicked out of her by Santa.

The other major plotline this week, and a very watchable one, introduced us to Leigh Emerson, a Christmas obsessed serial killer, who dressed like Santa Claus before getting locked in Briarcliff.  Ian McShane clearly gets this show, as his performance as Leigh is the perfect blend of over the top, scenery-chewing camp and sleazy creepiness.  From his first monologue abut how Santa gets off with no culpability, to the brutal fight with Sister Jude, Leigh is incredibly fun to watch.  I loved seeing him complain about the tightness of his handcuffs, only to flip into homicidal mode a second later, ripping off the nose of an asylum worker with his teeth.  He’s as vicious as he was theatrically over the top, and it seemed like McShane was having a blast every moment.

Leigh’s story was a fairly major divergence from the ongoing plot of the series this season, but it was such a fun one I didn’t mind.  And the smart, tight script by series veteran James Wong not only manages to make Leigh’s story feel complete, but keeps many other plates spinning as well.  Frank the guard, wrought with guilt over accidentally shooting Grace, is planning to confess everything that happened– from Kit’s arrival, to Arden’s monster to his own accidental homicide– which the Doctor obviously sees as a problem.  Mary Eunice’s solution to this problem is what leads to Leigh being released from solitary confinement, although it’s Mary Eunice herself who ends up killing poor Frank– pinning the murder on the deranged Santa she just freed.

Lana and Kit also reconnect as both recover from the harrowing experiences that brought them back to Briarcliff.  Once again, the pair plan an escape from the asylum, but this time with more purpose– they need to expose Thredson as the serial killer Bloodyface.  When Lana realizes Mary Eunice isn’t going to call the police, she takes it on herself to find a phone… only to run into Thredson.  But the insane psychiatrist isn’t back in the asylum by official channels– he snuck in to kill Lana, tying up the one loose end of evidence that would link him to Bloodyface.  Thredson completely dismantled his torture room/ lab, so in his mind Bloodyface was already “killed” by Lana… but he plans to resurrect his homicidal alter ego, starting with her death.  Things take another turn when Kit gets the drop on Thredson, though, and the two inmates manage to restrain the mass murderer, making him their captive.

Looking back, this was one jam-packed episode.  There were a LOT of great moments, both in the more self-contained, and longer-reaching storylines, and despite everything that went down, the episode felt remarkably balanced and not overcrowded. It felt like this week gave Arden one last chance for redemption, which he gleefully rejected, so at this point I’m just waiting to see how he’ll get pwned (possibly related to the aliens, who abducted Grace’s body before he could feed it to his mutants?). Lange continues to be amazing as Sister Jude, whose strange obsession with Briarcliff gets more intriguing each week, while Mary Eunice continues to be a great foil, especially as it looks like she may end up being the season’s “big bad.”  And Ian McShane made a great guest star, and he clearly had a great time, gnawing on every set piece with so much energy and weirdness. I really hope he comes back for another round of AHS next season.

It’s interesting that Season One’s story arc ended at Christmas, while Asylum passes the Holidays at the mid-point of the season. It’s just another way this new season feels different from the Murder House story arc, but that sense of unpredictability– of not knowing what’s coming next– is really my favorite part about this show.