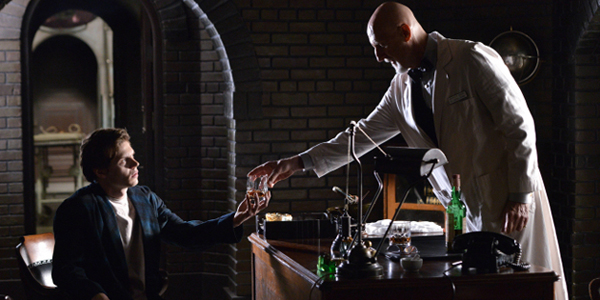 We’ve been in the Asylum for over two months now, and the new season of American Horror Story continues to pack in as much lunacy as possible in the latest installment.

American Horror Story has set a grand tradition for itself by overstuffing its story with as many plot twists, gratuitous (and often graphic) subplots, and a few genuine shocks thrown in for good measure.  It didn’t always work so well for Season One, which, while entertaining, felt like a duck press of homages and tributes to other (better) tales from the horror genre, but I have to give Asylum credit– they’ve tossed about the same number of kooky, over-the-top things into this season, and by and large it’s still managing to be a much more cohesive narrative.

“The Coat Hanger” is another episode in which a LOT of stuff happens, as the many players move about the board toward what I can only hope will be some kind of epic, good vs. evil confrontation (I say hopefully, because the trend of seeing the good guys get dumped on and the villains reign supreme totally continues again this week). I think my favorite part of this season is how many twists have been organic, as opposed to cheap shocks– Dylan McDermott shows up in this week’s modern-day opening, as a troubled man checking in with a pet psychiatrist, and, like one of our commenters mentioned a few weeks ago, he’s the son of Dr. Thredson.  But AHS wisely chose not to hold their hand– it’s not some long-hinted, slow reveal, and about five minutes in to his increasingly menacing conversation with the shrink, McDermott comes right out and SAYS he’s the son of Bloody Face.  The scene is still plenty suspenseful, but rather than draw out this reveal, it gets it out in the open quickly… and lets the suspense build thirty years earlier as Lana is aghast to reveal she’s pregnant with Thredson’s child, after he got all rape-y with her.

The coat hanger of the episode’s title is Lana ultimate tool– after imploring an uncaring Sister Mary Eunice to let her abort the serial killer’s child, Lana realizes she has to take matters into her own hands, with a self-administered abortion. With that done, she and Kit use the presence of the child to coerce a confession out of the captive Thredson, before breaking his heart by telling him she already performed the abortion.  There’s a bit of stupidness going on, as yet again Lana has the chance to kill the vicious killer then and there, but instead TELLS HIM she’s going to get a weapon… THEN come back and kill him.  When she can’t procure a knife Lana fashions the coat hanger into a shiv to slash the Doctor’s throat, but when she goes back to finish the job, the enraged, grieving killer has escaped and is apparently on the loose in Briarcliff.

Oh, and Lana screwed up the abortion, too, so she’s still pregnant.

While all this is going on, Sister Jude has been committed to the Asylum, the victim of a VERY elaborate frame-up by Mary Eunice and Dr. Arden which pins the murder of Frank the guard, AND the assault on killer Santa Leigh (who’s NOT dead– yay!).  Jude begs the Monsignor to release her, but he’s been convinced thanks to a remarkable mix of Mary Eunice’s silver tongue and his own profound dumbness that Jude is crazy, and will only impede his dreams of winding up in Rome.  This hubris motivates the Monsignor to take Leigh under his wing– if he can reform this seemingly- penetant psychopath, surely he’s divine enough to actually become the Pope!

Things don’t go too well in that department, as Leigh turns on the self-righteous priest before drowning him in holy water (!) and crucifying him on the chapel’s cross (!!).  So now we have both Leigh AND Thredson– two stone cold psycho killers– running loose in the Asylum!

The Monsignor may have been the only one in authority who could help Jude and the other victims, but without him, the former nun turns to Lana, promising to help her escape, after finally truly realizing how horrible her crimes against the young reporter earlier this season had been. It looks like these two will be the latest to join forces for Team: Escape Briarcliff, because Kit has been distracted by Dr. Arden.

After his Grace-abducting encounter last week, Arden is a full believer in Kit’s aline abduction stories, and is fascinated to find out more about the extraterrestrials and their eugenic experiments. He hypothesizes that they appear when Kit is in danger, so he wants to bring the inmate to the brink of death in order to trigger a reappearance of the creatures. Kit goes along with the plan, believing that the resurgence of the aliens might lead him to his wife, so Arden uses a chemical to stop Kit’s heart.  Sure enough, the white lights return as Kit lays dying on Arden’s gurney, but it’s the Nazi doctor who has an unexpected discovery– he finds Grace, lying naked and very pregnant in a corner of the room.

That all happened in about 44 minutes, and yet, once again, the show balanced its many plotlines with a sure enough hand to not feel overloaded.  I really think playing with the audience’s tension level helps here– if they tried to make EVERY plot twist a shocker, things would blow up. But letting some of the twists come out quickly (McDermott’s reveal as Bloody face, Jr, and c’mon– did anyone really think Leigh reformed that quickly?), while keeping others shrouded in mystery (happy as I am to see her back, how the Hell did Grace return from the dead… 9 months pregnant??).  I’ve really been digging on this season, with all its craziness and twists and genre-bending, and even at its campiest moments, I think Asylum is still vastly superior to the first Season. I struggled with the mid-season lull of the Murder House story arc, but things have a nice forward-moving pace in Asylum that makes me more and more excited to come back each week to see what batshit crazy thing will happen next.