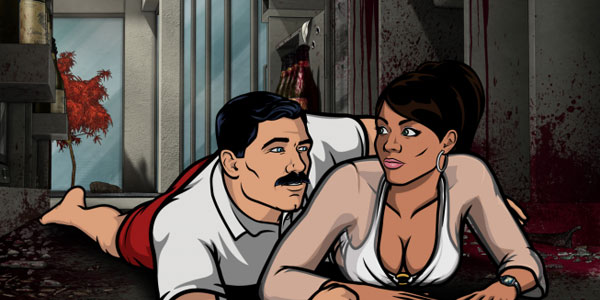 Archer is back!! Sort of…

The funniest show on TV is back as Archer kicks off its fourth season, with a truly bonkers crossover episode with another Jon Benjamin-voiced cartoon character.  Nope, not Ben Katz or Coach McGuirk… Bob, of Bob’s Burgers!

The premiere picks up two months after anyone at ISIS has seen Sterling, who is suffering temporary amnesia and under the belief he is Bob Belcher, a burger flipper on the Jersey Shore.  Sterling/ Bob gets incredibly confused when a KGB hit squad enters his restaurant attempting to kill him, and becomes even more confused as he easily dispatches of the killers using his unknown combat training.  Bob does the only thing he can think to do– leave his new wife Linda and her kids and decompress at a spa.

The rest of the ISIS crew discovers what’s going on thanks to the massacre at Bob’s Burgers, along with some insight from Krieger on how amnesia works– they have to slowly restore Sterling’s memory, otherwise he might break for good.  So Lana is volunteered to catch Bob’s attention, with Cyril and Krieger play KGB agents for a staged attack the team hopes will snap Sterling out of his amnesia.  Unfortunately for all of them, the real KGB attacks at the same time, leading to an epic, molotov-throwing, bikini burning standoff at the spa.

“Fugue and Riffs” was a very funny episode, which balanced the great character dynamics between this wonderfully dysfunctional cast, along with some truly over the top, gory action.  The end result was 22 minutes of quite a few belly laughs– I loved Bob’s use of the burger joint as a weapon to kill the KGB assassins– along with some snappy dialogue (Cyril’s line about Krieger’s “naturally evil” face was great).

The crossover concept was equally cool, although definitely lead to more questions than answers (like, where was the real Bob Belcher?).  It was a great touch to hear John Roberts as Linda, Bob’s wife, and seeing her and Tina, Gene and Louise animated in Archer style was a blast.  I almost wish more could have been done with this, some kind of truly outrageous reveal that Sterling and Bob have, in fact, been one in the same all along.  But it was heady enough with the amnesia angle, which kept the episode moving at a brisk pace and featured a great punchline.

It still floors me that the cast of Archer record their lines independently, because there’s such a chemistry between every one of these snarky spies and their co-workers, it’s uncanny.  Place any random pair of them together, and the results are hilarious.  I like how this season premiere is an echo of Season Three, with Archer disappearing yet again.  This time out, he returns to the fold much more quickly, but how he gets there is just as hilarious as the “Hearts of Archness” miniseries.