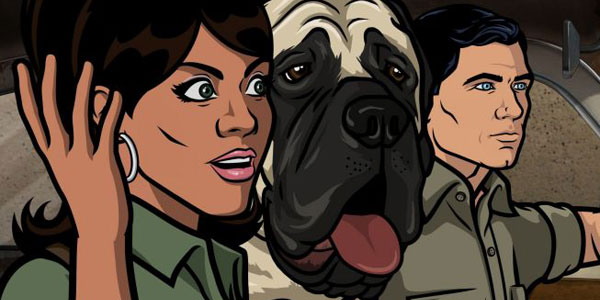 Archer and Lana team up for another field mission in this week’s fantastically character-driven episode.

The best episodes are Archer this season have been the ones that spotlight Sterling and Lana, and their wonderful love-hate relationship.  This week, the duo is on assignment in Tangiers to intercept the mysterious Agent Kazak, who has vital information the ISIS team needs to collect.

What the agents don’t know is, Kazak is a big slobbery dog– a reveal which delights Archer as much as it disgusts Lana.  Once the ISIS team discovers their assignment, they need to get out of Tangiers to their extraction point, but in order to do that Lana has to deal with Sterling’s typical boorishness and Kazak’s not so typical dog-ness.

Another theme of this season has been Lana’s growing concerns with ISIS and their often-questionable assignments.  This comes to a head this week, as Lana up and quits ISIS, wandering off alone into the Tangerian desert.

Meanwhile, there’s some big stuff going on at ISIS headquarters, as Pam throws her hat in the ring to become a field agent.  Yes, this same plotline ran last season with Cyril, but the more I thought about it… I’m loving the idea of Pam as an agent. She’s steeped in ISIS knowledge, she’s tough as nails (thanks to her fight club background), she’s a demon behind the wheel… the seeds have been planted over the past two years to make Pam a damn fine field agent, even though we never put the pieces together until now.  And so, what could have been a throwaway gag actually becomes a legitimately interesting new plot, one that I really hope continues to develop.

Back in Tangiers, Sterling has a crisis of conscience and he and Kazak drive off to rescue Lana.  They find her at the same time as a band of hostiles, who the dog makes short work of, and soon all three agents reach the extraction point… and discover Kazak was carrying some vital information on his collar, which will actually help thousands of innocent people for a change!

While the Pam plot was very intriguing and Kazak was just hilarious, the best moments of this episode came from Sterling and Lana’s interactions. I’m still incredulous that the voice actors record separately, because Jon Benjamin and Aisha Tyler radiate so much easy chemistry in animated form. It’s a credit to their voice work, as well as the animation and script writing that make this odd couple one of the most watchable on television.  It’s becoming painfully obvious that despite their HUGE laundry list of issues (both personal and with each other) Sterling and Lana still love each other very much, and I’m getting the distinct feeling they will get back together much sooner than later.

With the Season Four finale just around the corner, I’m curious if the ISIS top agents’ raging chemistry will come to a head before the end of the season?  I know I, for one, would totally love to see it happen!