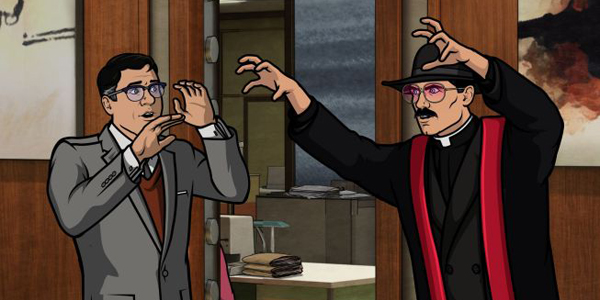 ISIS hits the Vatican when they’re hired to protect the Pope.  Mayhem ensues in this funny, yet surprisingly toothless episode of Archer.

When ISIS is hired by a Vatican Cardinal to protect the Pope from an assassination attempt, supposedly by the Swiss Guard, I knew we were in for another very funny field mission.  And yes, it really was, from the very get-go– Mallory’s reasoning for not tapping Lana or Ray for the mission (Ray’s… “accent”) was a nice echo to the last time she sidelined them earlier this season, especially since this time Lana doesn’t take “no” for an answer, and opts to join in anyway. But the role of “Agent in Command” has already been claimed by Archer, in a Father Guido Sarducci disguise, along with the latest field agent in training, Pam.

All the office stuff is basically act one, as the mission is established, and it’s revealed Archer’s butler Woodhouse is the spitting image of the Pope, so he is roped in to the field as well.  Along the way, we get a few running gags for the week, including a great bit where Cheryl gets caught in a swearing/ apologizing loop, but my favorite lines had to be Archer and Pam’s dialogue about the gayest X-Men.  There hasn’t been much going on between these two since they hooked up last year, but this episode reminded me how good Jon Benjamin and Amber Nash are bouncing off each other.

The rest of the episode sees ISIS’ plan carry out (and at least they’re on the right side of basic human morality, for a change).  It’s a simple plan– swap out the Pope for a disguised Woodhouse as a decoy for the assassins, then, well, kill the assassins.  Of course, things don’t work out so simply, leading to a slightly crushed Pope, a smack-fixing butler, a setup by the Cardinal (who would be next in line for the Papacy), and a very well executed car chase through the streets of Rome.  Once the day is saved, with Sterling exploded, naked and covered in broken glass, it’s revealed that the Cardinal hired ISIS knowing their track record for failure– that was his cover to make it look like he didn’t hire the fake Swiss Guard to kill his predecessor (which he did).

There was a lot to like in this episode, which featured the long-awaited return of poor Woodhouse (who was now decidedly less haggard sounding), and the randomly identical twins being switched plotline was just begging to be sent up on this show.  Archer and Lana have some more nice moments this week (not as many as we saw in the last two episodes, though), but it was really Archer and Pam’s back and forth’s that stole the show this episode.  It was a funny 30 minutes, with another wonderfully legitimate action sequence to cap things off, which was very cool… however, tying the Vatican and the Pope into an assignment seemed like an idea just screaming for the edgiest content ever seen on Archer.  This show has definitely pushed the envelope when it comes to comedy over the past four years, and the Catholic Church just seems like the perfect target for some caustic jabs.  Instead we get a lot of jokes, but none aimed at the church or even the Pope himself– like I said, what we got was very funny, but the setup just seemed like it could have mounted to something even more pointed, funny and clever. 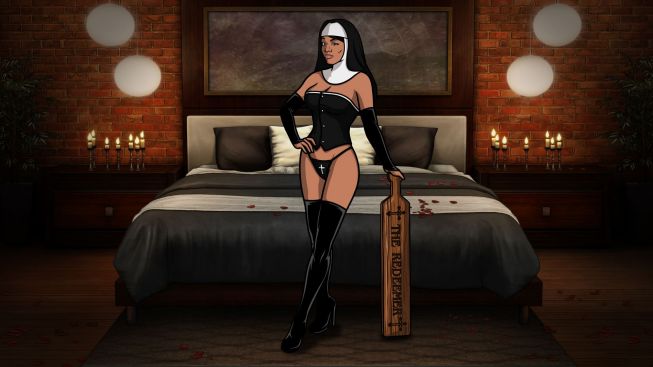 Next week starts the first half of the two-part season ender… Are you hoping for another all-new story? Or maybe a continuation of a classic plotline, like Barry and the KGB or the search for Archer’s father?