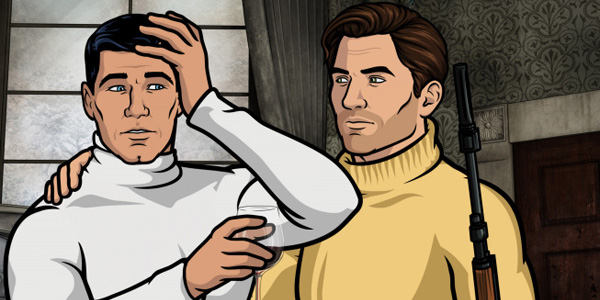 Archer takes a crack at the renegade agent trope for another great installment.

This week sees Archer and the ISIS crew going through two different struggles– Archer is despondent to hear about the death of Lucas Troy, his best friend and fellow ISIS trainee, until Troy defected to ODIN after completing his training.  The rest of ISIS could care less, since not surprisingly Sterling’s best friend in the world was a pretty big douchebag.  Also, they’re hung up on Pam’s pet project, the annual peer reviews, which most of the office will go to great lengths to avoid.

Sterling discovers Luke faked his own death, disappearing along with a case of plutonium and four of his fellow ODIN agents dead.  Archer decides to meet his bestie in Vermont to help clear his name, as all signs point to Luke as a traitor.  Which, of course he is– having killed his fellow agents and stolen the plutonium to sell on the black market, Troy wants to open a bed and breakfast up North, the start of a new life with Archer, the other half of his beloved bro-,mance.

Lana and Cyril are dispatched after Archer, leading to a great confrontation in the woods, as Troy tries to kill the agents to defend his awkward future plans with Sterling.  Lana is intent to survive, and rescue Archer, but Cyril has more concern about completing the peer review of his former lover and current partner.

This episode was classic Archer, and did a great job of marrying the workplace and superspy plotlines into a tight and hilarious installment.  While it didn’t have as many laugh out loud moments as last week’s premiere, “The Wind Cries Mary” had a wonderfully awkward comedy about the dynamics of the bromance, and what it means that Archer and Luke clearly love eachother, despite neither being gay.  Tim Olyphant has a great turn as the rogue agent, and his crackpot B&B idea is as weird as his contradictory true feelings for Sterling.

Equally great was the office interplay.  We’re introduced to the new armory manager, Rodney, whose uptight, pain-in-the-ass attitude makes him a joy to watch and a wonderful new addition.  Rodney should be instantly recognizable to anyone who’s worked in an office– he’s the guy who takes the by-the-book rules to such an extreme, he pisses everyone off– and revels in doing so.

The peer review stuff is very funny as well, especially Pam’s insistence in its importance and Lana and Cyril’s ongoing fight/ review.  The former comptroller still makes for one incredibly terrible field agent, and his choice to wear a bright orange snowsuit to protect himself from hunters was facepalm-inducing, as was his decision to strip to his underwear in the arctic wild upon realizing the suit made him a clear target for someone trying to shoot him.

Once again, the action was actually great, with a great game of cat and mouse in the woods between Lana and Troy, and the payoff of the rogue agent’s dying confession to Archer made for an epically uncomfortable close to the episode.  The series has flirted with the renegade agent idea before, but this episode was the first classic sendup of the genre staple.  The result was one of the strongest, if not most belly laugh inducing, installments of this great series.