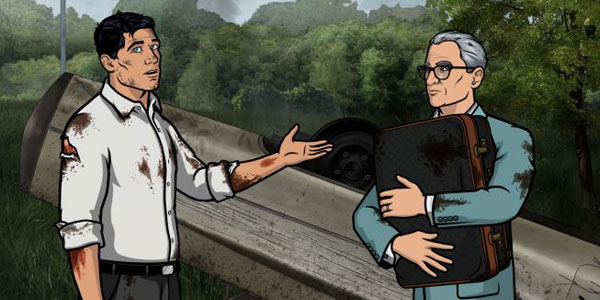 Archer gets some one-on-one time with his new stepdad– and an odd-couple road trip fiasco– in this week’s episode.

After this week, I’m pretty convinced Ron Cadillac has been catapulted straight amongst my favorite Archer characters.  The dealership mogul/ Mallory’s new husband may have seemed dull and unexciting to his new wife and her co-workers at ISIS, but this week, Ron proves them all very wrong.

When Sterling gets stranded with no cash, passport or transportation out of a Canadian casino, Ron opts to drive North to rescue his son-in-law.  Between Ron’s boisterous personality and Sterling’s mommy issues, it’s clear these two won’t get along on their road trip back to New York, and what follows is a journey filled with nods to many of the greatest buddy cop/ odd couple movies of all time.  What’s great about this is, as usual, Archer doesn’t just parody scenes from movies like Midnight Run or Planes, Trains and Automobiles— it crafts new scenes that feel like they could fit seamlessly into those classics.  It’s smart and hilarious, and shows a greater understanding and appreciation for the source material than a lazy, Family Guy style sendup.

On top of the buddy cop theme, we also peel back the layers of Ron Cadillac, as his shady history is revealed to Sterling.  The unassuming car dealer started as a carjacker in the 30’s, and he’s still in with the mob (the reason for his mysterious briefcase delivery in northern New York state).  Ron’s mob troubles complicate the duo’s road trip even further, as do other obstacles they face, from psychotic S&M truckers to boxcar hobos, and the sheer number of misadventures Ron and Sterling go through in 22 minutes is an impressive testament to this show’s fantastic pacing.

By the time the guys arrive back in the city (in time for Ron to take Mallory to the opera), Sterling has a new found respect for his step father.  In most shows, this kind of character driven plot development would be lost by next week.  With Archer, it very well may, but if so, it would be intentional– one of the many things that makes this show so brilliant is the show’s ability to call back its own plotlines, episodes or even seasons later.  Maybe next week, Sterling’s mommy issues will drive him straight back to hating Ron, but I get the feeling the setup of their relationship in “Midnight Ron” will come back into play somewhere later this Season.