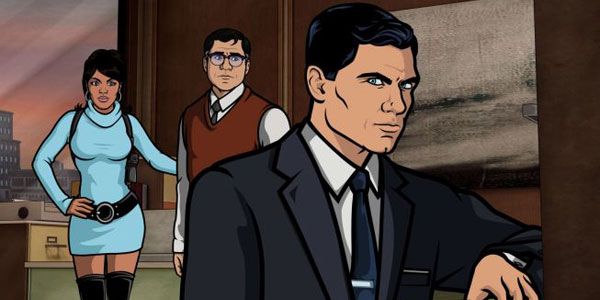 KGB!  Space Stations!  Inappropriate office trysts!!  This week’s Valentine-appropriate Archer has it all, and it’s one of the series’ finest moments.

What makes Archer great, more than anything, is the impeccable balance Adam Reed and his absurdly funny team manage of never delving too far into spoof territory, nor playing anything straight.  That’s where “Viscous Coupling” really excels– what we get this week is a brilliant mash-up of legit covert spy shenanigans wrapped around a plot not to destroy the world, but to get Sterling Archer laid.  It’s smart, fast paced and features a delightfully reckless narcissism and social awkwardness we haven’t seen this perfectly realized since Seinfeld, and the result is an Archer episode for the ages.

It’s Valentine’s Day, and Sterling is down, realizing he’s the only one left alone clutching his grappa (nope– not a euphemism), until he gets a call from his ex-fiance and current cyborg, Katya.  The Russian spy is despondent over the disappearance of her current flame, Barry the psychotic KGB cyborg bent on Archer’s demise.  At the end of last season, Archer and the ISIS team left cyber-douche Barry stranded on a space station, and now Katya begs Sterling to bring him home.  In an attempt to get back into the femme fatale’s pants, Sterling agrees– his plan is actually clever, if not very rounded: Once Barry gets back, his awful personality will turn Katya away from him… right into Sterling’s waiting arms.  The part the ISIS agent forgets, though, is Barry’s desire to kill him very badly.

Risk of robotic death and dismemberment, of course, won’t stop Sterling from getting his rocks off, and cyborg versus cyborg action is enough to motivate Krieger to help the spy get Barry’s ship repaired and back to Earth.  Halfway through the plan, Sterling realizes there’s a much simpler solution– get Katya to hate Barry and WANT to leave him stranded in space.  He sets about working with Pam to (poorly) edit a confession from the voice clips he has of Barry, but by the time he plays the tape for Katya, Krieger’s super-science has already fixed Barry’s ship and he’s on his way back to Earth.

The twists and turns as Sterling negotiates this covert operation are great, as he races back and forth from Katya’s apartment to ISIS rolling his scheme out, one step at a time.  The intrigue would actually work like gangbusters, were Sterling’s motivations less self-serving, and it’s hilarious just watching how far he’ll go to get what he wants (for the moment, Katya).  “Viscous Coupling” also moves along the Barry trapped in space plot, bringing our arch villain back to planet Earth… surely for another go-around with Sterling in the near future.  The other big reveal, that Katya has taken Barry’s place as head of the KGB, will surely complicate their little love triangle even more.  I can’t imagine the ex-ODIN goon taking too kindly to being usurped by his girlfriend.

In some shows, plot advancing and entertainment don’t always go hand in hand, but this week’s Archer feels like it accomplishes both perfectly, moving the pieces into place for the next big step in the Archer vs. Barry storyline, while simultaneously telling a damn good spy story.  And on top of that, it’s funny as hell, truly making this one of the finest installments of the entire series.