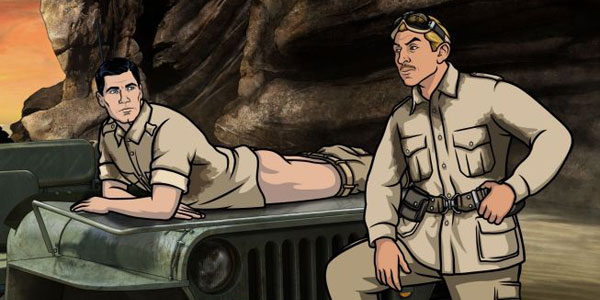 It’s been a while, but this week sees anther Men on a Mission sendup, as Archer, Cyril and Ray head to “Turkmenistan” and get horribly sidetracked thanks to a sand dune and a snake bite… The results are a mash up of in-the-field action and an origin-expanding head trip for our main ISIS Agent.

“Once Bitten” drops us in the midst of the action, as Sterling, Cyril and Ray are stuck in a sand dune in the deserts of Turkmenistan, the fictitious worst place on Earth.  Their assignment was to find the warrior king of this shithole, and pay him off to impede an oil drilling endeavor that would benefit the Russians, on behalf of one of ISIS’ shadier clients.  But the plans are awry from the start, and only get worse as Sterling gets bitten by a venomous snake while taking a dump.

As Sterling quickly succumbs to the snake’s poison, he hallucinates a scenario where he and the ghost of James Mason (a returning Peter Serafinowicz) go on a Christmas Carol-style guided tour of his past, revealing some shocking new evidence as to why Sterling is the way he is.  Apparently, back in college while he was still on track to become a world famous lacrosse player (yep, such a thing does exist), he was stalked and ultimately shot by a beautiful yet psychotic fan girl.  The resulting gut shot ruined his sports dreams, and set up another layer of his problems with trust, especially with women.

Of course, Sterling isn’t the only one with some major gender issues– Lana is stuck at ISIS during this mission, since the backward, mysoginistic attitudes in Turkmenistan prevent her from being in the field.  When she discovers the sinister intentions of the mission, she’s once again displeased to see ISIS on the wrong side of human decency, but there’s little she can do about it from the office in New York.  But she’s even more upset by her co-workers’ insistence that she’s too heavy on her feet. Both conflicts lead to Lana being shut out of the mission entirely, so she’s left to simply clomp around the office for the week.

While Sterling sinks further into hallucinatory revelations, Cyril saves the day after Ray frees the jeep and throws his back out (despite his super-human mechanical legs, he lifted with his normal-human back), and the trio is on the road to get help for Archer… until they crash into a camel and get captured by the tribe in charge of Turkmenistan.

The agents are taken to the main headquarters (tent) of the nation’s rulers, and Ray and Cyril desperately attempt to communicate Archer’s snake bite.  This leads to the best laugh-out-loud bit I’ve seen in a long time– see, the simple and vain ruler of the crappy nation is so egotistical, he has a habit of changing words in their language on a whim.  As such, the words for “bread,” “Fridays,” and “snake” are all the same as his dog’s name, “Gerpgork.”  Cyril’s attempt at drawing a crude snake make the Turkmenistanians think he wants a loaf of bread with eyes on it (which they happily provide)… but thankfully Ray’s superior artistic skills get the point across and the thugs offer antivenom, in exchange for $25,000 of the $90,000 the ISIS agents are still carrying.  I loved Ray’s nonchalance about giving them the money, whispering to Cyril that the two agents will simply split and pocket the remaining cash.  It’s not that Ray is completely dishonest, but he’s a smart enough agent to know how to play the game, and getting former Comptroller Cyril on board to embezzle while they’re both hip-deep in danger was excellent.

So Sterling is saved, and in the meantime completed his journey of self discovery… including who his real father was.  But now that he’s back to the world of the living, he totally forgets what he saw before he can reveal the name.  I’m pretty confident the “Who is Archer’s father” thing will actually have a conclusion, as all the false leads seem to bring the agent a little closer to the truth.  This gag felt like a true tease, and I’d be disappointed, except I trust that Adam Reed and his team know what they’re doing with the story thread.

“Once Bitten” was a solid episode of the series, with a very funny field mission, especially once the thuggish Turkmenistans show up.  There were plenty of character moments for Sterling, as his head trip peeled back many new layers of the narcissistic hero, and even though nothing really got resolved, it felt like these new discoveries still moved the overall development of Archer as a character forward in a big way.