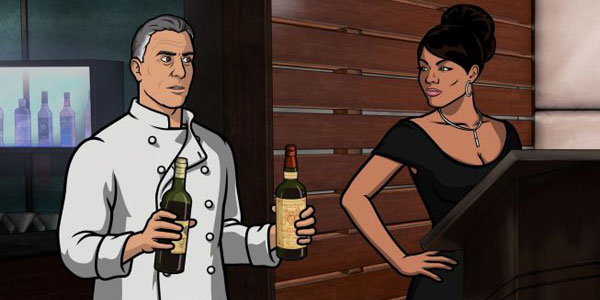 It’s another field mission week for Archer and his fellow ISIS agents, as they go undercover at the fancy and downright douche-y restaurant of celebrity chef Lance Casteau (guest star Anthony Bourdain), in an attempt to protect a high ranking Albanian diplomat who is hosting a dinner party.  The resulting adventure focuses a bit more on the kitchen antics than spy work, which makes sense as Archer especially gets embroiled in the high end food world, being taken under Casteau’s wing as a new prodigy based on what a dick he is to Cyril.

There’s some great send-ups to the fine dining world that Bourdain himself loves to showcase (and skewer) in his own works, and it’s so on point here that I think it’s a safe assumption he was a little more hands-on with this collaboration that just recording his lines.  Each ISIS agent is horribly out of their element, with Lana acting as the scatterbrained hostess, while Ray is a lowly waiter and Cyril a Garcon de Cuisine.  Sterling scores the role of Sous Chef, and his typically boorish attitude gets mistaken by Casteau for culinary skills, and the agent couldn’t be happier for the chef’s approval.

Bourdain fits right in with the cast, and the documentary-style structure of the episode (filmed as an episode of Casteau’s Bastard Chef reality series) gives the famous culinary master plenty of chances to both opine and satirize his profession.  I loved the subtle digs at Food Network and Gordon Ramsey, and the overall attitude of Casteau’s restaurant– their reservation line doesn’t take actual reservations… the only way to book a table is through a secret number given out by Casteau to those he personally deems worthy.

And of course, the reveal that ISIS took this mission just so Mallory could snag her own table at the restaurant wasn’t much of a surprise– we’ve seen her leverage planted threats and ISIS protection many times in the past to live her elegant lifestyle… but once again it blows up in her face as the Albanian diplomat actually does turn out to the the target of an assassination… committed by Chef Casteau himself!  As the Bastard Chef makes his escape in a helicopter alongside his employers Katya and Barry, ISIS is left dealing with the dead ambassador and another failed assignment.

The highlight of this week was without a doubt Bourdain (I should have seen this guest spot coming, after his appearance at the Archer panel at Comic Con last Summer), and he was so on point as the ego-maniacal, pretentious culinary overlord that I easily forgave the episode’s structure, a virtual carbon copy of Season One’s airship-based “Skytanic.”  The ending of the episode suggests we won’t be seeing a return appearance for Casteau, but it’s open ended enough that the new villain could potentially resurface, and after “Live and Let Dine,” I have to say Archer would be an even better show for a second go-around with Bourdain.