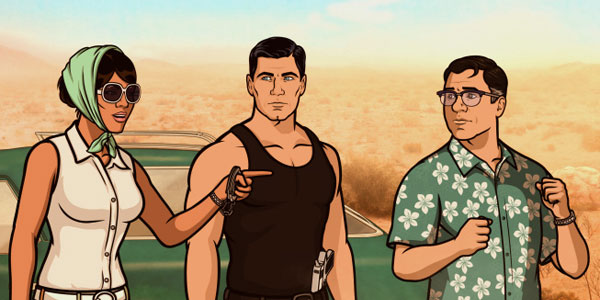 The ISIS Agents are recruited to Southern Texas by the Texas Border Patrol to help take down a notorious “Coyote” (border smuggler) in this week’s mixed bag episode of Archer.

I’ve got to admit, this week’s Archer felt a little off, and I’m not entirely sure why.  The story, which follows Sterling, Lana and Cyril to Texas to ambush and capture Moreno, the Mexican immigrant smuggler.  With their trap in place, things quickly fall apart because of the agents’ in-fighting, with Sterling sulking after Lana accuses his crass personality as a sign of autism.

With the plan already in the toilet, things get even more off track when Archer instantly falls for the gorgeous Moreno, and switches sides to help the beautiful criminal and her human cargo escape from his fellow ISIS team.  This whole back story is framed around Lana and Cyril’s debriefing to Mallory back at ISIS, as Sterling has gone off the grid in a station wagon full of Mexican illegals.

The episode cross-cuts from this point, between Archer’s adventures with Moreno and the immigrants, and the random stuff that orbits Lana and Cyril as they recall the story of the botched mission.  As Archer runs into some Texas Border Patrol agents, he gets shot, leading Moreno to bring him to a shady doctor to patch him up. The doctor admits Archer still needs an emergency medivac, which he gets via a helicopter in the Texas plains, but once on board he discovers the truth– Moreno and Mallory set this entire mission up to fail, using Sterling like a pawn to screw up so royally the illegals would be able to get away scott free.

“Coyote Lovely” wasn’t a bad episode, but it certainly wasn’t the finest point of the series.  A lot of this week felt like ground that had already been covered (Archer going rogue, Mallory planning a mission for the wrong side), and there wasn’t much direction or structure to the fairly random office hijinks this week, making it hard to call it even a “b” plot.

But what worked, worked great, and it’s not surprising that the interplay between the three field agents was the high point of this week.  Archer’s juvenile reaction to Lana’s (equally juvenile) name calling was hilarious, as was his fist fight with Cyril.  Also amusing– Lana’s reveal as an anti-immigration conservative.  I found myself siding with Sterling when he asked how a “Lorax-blowing tree hugger” like Lana could be so fervently anti-immigration, but with her soldier-esque persona, and rejection of her 100% anti-establishment roots when she first joined ISIS, it makes sense… and more to point, it makes her a real person.  I love how rounded the characters of Archer are, and while Lana’s right-wing stance was used as a (very effective) joke, it’s nowhere near as “out of left field” as it seems at first.

One other interesting note– this episode was initially scheduled for much earlier in the season (it should have followed the premiere), but it was pushed back for some unknown reason.  I’m wondering if two “Archer goes rogue” episodes in a row (this, along with “The Wind Cries Mary”) would have been too awkwardly paced?  With its light continuity, Archer episodes can be shuffled fairly easily, although this is the episode in which we see portly board op Bilbo die, which was referenced a few weeks back in “Once Bitten.”

At the end of the day, a bad episode of Archer would still be funnier, smarter and more entertaining than 95% of the rest of TV, and while “Coyote Lovely” was by no means a bad time, something about it was just too loose, too unstructured and too repetitive to really stand out.