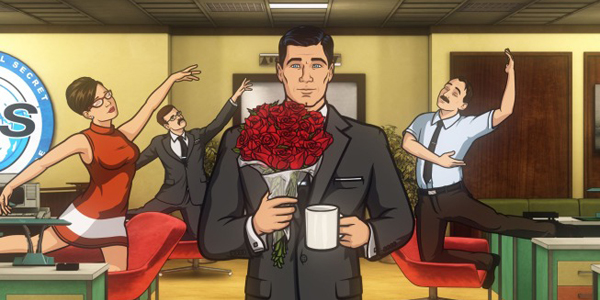 Archer‘s soft reboot shakes everything up for Season 5.

There were a lot of things I predicted would shake up the ISIS team starting in the fifth season premiere of Archer, but creators Adam Reed and Matt Thompson took things WAY further than I imagined.  Seriously, Lana’s pregnancy is now barely the tip of the iceberg.

We kick off with an absurdly serene morning at ISIS headquarters, as Sterling is greeted by welcoming and receptive co-workers, as picturesque music lulls in the day… until a flash bomb goes off and ISIS is overrun by “Storm Ninjas.”

It turns out the attackers are FBI (they’ve been meaning to add their logos to the fronts of their uniforms), and everyone at ISIS is under arrest for– among other crimes– running their covert operations with no sanction from the government.  I love this setup; it’s always been fuzzy what (if any) relationship Mallory has with the government, and to finally discover five seasons and countless globe-trekking adventures in the answer is NONE is fantastic.

With everyone in custody, the FBI drills them down one by one to confess to the litany of crimes ISIS has committed, and many of our team do just that, under the assumed promise of immunity for themselves.  It’s interesting to note that Sterling and Lana are the only ISIS detainees who did NOT sing like canaries to the FBI, although they don’t win any points by staging a breakout and attempting to rescue their co-workers from captivity.

But it’s not necessary– Mallory actually came through on her word and protected them all, even at the expense of promising ISIS will be dead for good (maybe she does has some compassion left in that cold, dark heart?).

See, this is where most reboots would end.  The dynamic we have been used to is already gone, ISIS is no more, and the characters can scatter like the wind… except no, not this time.  After some delusional discussions of their future plans for employment (pro lacrosse, underground fighting, the world’s biggest country musician, and lawyer… I’ll let you guess who wants to be what), we get the next big reveal– a (literal) ton of cocaine hidden inside ISIS headquarters!

This, then is how things will shake out in the new, even crazier world of Archer… the ex-ISIS crew decide to settle their retirements by forming a cartel to sell the coke.  The jump from secret agents to drug traffickers is laugh-out-loud shocking… but in true Archer form, when you consider the long list of evil deeds these characters have done over four seasons under the ISIS umbrella, maybe drug trafficking isn’t as extreme as it appeared?