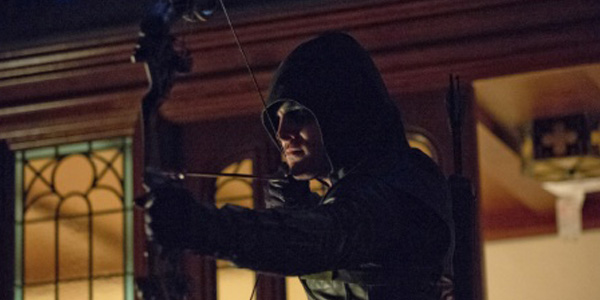 Can Oliver bring the city back from destruction? And who are the other heroes running around the town?

This seasons kicks off back on the island, but this time our hero is there by choice. After the destruction of the Glades Oliver leaves the Starling City and he feels he has failed, living off on the island alone this time. Dingle and Felicity parachutes in on the island to get Oliver back home. They convince him to come home to a city is now even worse off than before.

Everything has changed for the people around him including his family and friends. Laurel is now a DA assailant, her father is now just a beat cop, his mother is in jail, and Thea has stepped up taking over he club with Roy.

Oliver is feeling the walls close in on him as his city and company are being taken over by hostel forces. The Hoods are a gang of Glades residents taking what they feel they are owed for the tragedy. They are following in the Hood’s example killing who they think should be killed using their own twisted moral code. Queen Industries is also under attack, after the attack on the Glades Queen stock is falling and the company is prime for a take over. Isabel Rochev (Summer Glau) head of a rival company is ready for take that take over threatening to take Queen Industries from Oliver.

Oliver has to decide what to do should he don the hood again and become the head of Queen industries?

Oliver has changed because of Tommy’s death, and he realizes the importance of setting an example. He can’t be the hero in the darkness, he has to have a code as the Hood and use his company to save the city. Oliver captures the gang of Hoods after they abduct Thea, and instead of killing them he hands them over to officer lance. He dons the business issues suit to save his company looking to Walter for help. Oliver along with Diggle and Felicity are setting off on a new mission this season to save the city, not take down the bad guys. It may seem the same, but in the end its the methods they use that will define Oliver as a hero.