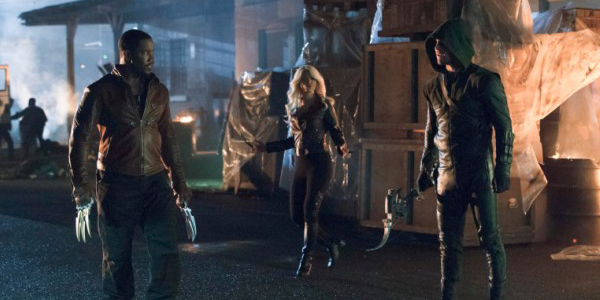 Every superhero has to deal with their identity, but this week Oliver is not the only one having issues with duel identities.

Oliver is having issues with who he is both in Starling City and the Island. This week’s flashback fill in some of the gaps of how Oliver loses his playboy self and becomes the killer in season one. He struggles with his choice to take a life violently to save Shado. There is also a grow rift between Slade and Oliver, which looks to be connected to Oliver’s relationship with Shado.

Back in present gangs are highjacking medical supplies for a hospital close to the Glades. The first one to try to take them down is Roy, he totals a car and almost kills himself trying to take down the crew. Roy is arrested, while the high jackers led by China White get away. When Thea bails him out it brings the problem to Oliver’s attention. Oliver goes to check out the hospital with Diggle and is confronted by Councilman Sebastian Blood outside holding a press conference. Blood is using the tragedy in the Glades to further his political career, but the only thing people see is Oliver focusing all their hate at him. Trying to fix things Oliver offers to throw a fundraiser, but when starts another truck is also highjacked forcing Oliver to pick the hood over his tux.

With Diggle’s help they are able to stop the robbery, but Oliver faces off against a new foe, Bronze Tiger. Armed with Wolverine like claws, Tiger tries to stop the Emerald Archer but is taken down by a taser arrow. Oliver also decides to help Roy by getting him off the streets and convincing him to get intel for him as the Hood.

Episode 2 ends in a major cliff hanger with Oliver caught in a trap set by Laurel and the police.  Will he get free without relieving his identity?