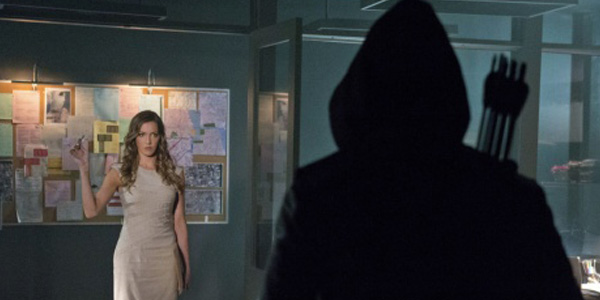 Can Oliver stop the Doll Maker before Laurel and Felicity become the next victims? And who is the new masked hero in down in skin tight leather.

This week’s episode picks up right where the last one left off, with Oliver surrounded by cops and Laurel. His only way out is to put down his bow and take off his hood, until he gets a little help from the new woman in town. The unknown masked lady ( known to comic fans a Black Canary) busts in and takes down the cops with a sonic devise, saving Oliver, and escaping into the night. While the cops are busy chasing the Hood, a former serial killer, the Doll Maker, has escaped Iron Heights prison thanks to the quake. He was taken down by Quentin Lance the first time, but because of his demotion Lance is warned to stay away from the case. Of course he can’t and he calls Felicity for some help, which gets Oliver’s attention. Oliver decides to help Lance, and the two go on the hunt, tracking down the killer but not before he takes down another woman. The two actually make a good team, and it is clear it is only a matter of time until Quentin is brought into the circle. The Doll Maker figures out who is after him and take Quentin and Laurel captive. He straps Laurel into his contraption, and as she is about to become his next Doll Oliver saves the day. He chases down the Doll Maker, but does not take the kill shot, that came from the Canary.

Wanting to find out who helped him out of a jam, Oliver sends Roy on a mission to find the new masked lady in town. Roy uses his street contacts to find an associate of the woman, Sin. A street smart punk girl who has been seen with the new woman. Roy tails Sin, but is caught off guard by the masked woman, and knocked out. The ladies talk and decide to let him go.

On the Island Oliver learns the problem with having attachments. When Shado’s life is in jeopardy, Oliver rushes in to save her, and gets Slade and himself caught in a blast. They are captured, and brought onto a boat called the Amazo.