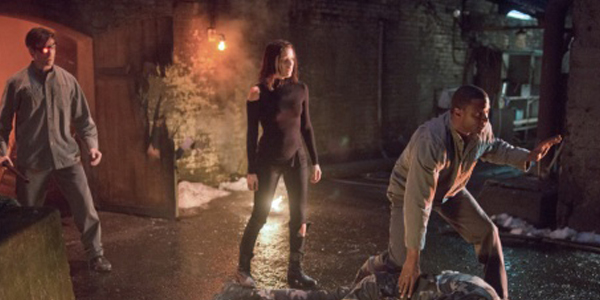 This week the Emerald Archer takes a trip to Russia and Amanda Waller makes her first appearance on Arrow.

This week’s episode of Arrow was light on the costumed adventures, focusing on one of Diggle’s biggest quests, Deadshot. Lyla tracked the assassin to Moscow, but lost contact with her team.

During a take down of some counterfeiters in Starling City Digg is taken by A.R.G.U.S. agents, held captive for a short time he is greeted by Amanda Waller, one of the leaders in the agency. She tells him that she know how Oliver and Digg spend their nights, and that Lyla was captured in Russia while tracking Deadshot. Digg head back to the “Arrow Cave” to pack, but Oliver and Felicity insist on coming with him. Digg also tells them why Lyla is so important to him, they were not just friends they were married. They work out a plan to get to Russia and meet with an old friend of Oliver’s, Anatoli Knyazev. We learn a little about his past on the ship and find out that he met a Knyazev while captured. Before they can leave Starling City though Isabel Rochev decides to tag along to keep tabs on her business partner, making sure he is not up to something behind her back. It makes the mission a bit more difficult, but Oliver is able to keep her out of the way mostly. The plan is simple Digg will be arrested, thrown into the prison, find Lyla, and escape with her.

Oliver has to be the back up, a role he is not used to, and while hard he is focused on the task to make sure Digg gets out in one piece. The plan goes off just fine, but goes sideways when Digg finds out that Deadshot is in the prison too. He has to make a choice work with the assassin or go it alone and maybe not make it. They two enemies work to save Lyla and make out to a waiting Oliver and crew. Oliver and Isabel had a rather close meeting this week, and it is clear that even though Felicity looks at him as a boss and friend there is more there for her. She is hurt and a little jealous of Isabel and wonder how that will effect the team going forward.