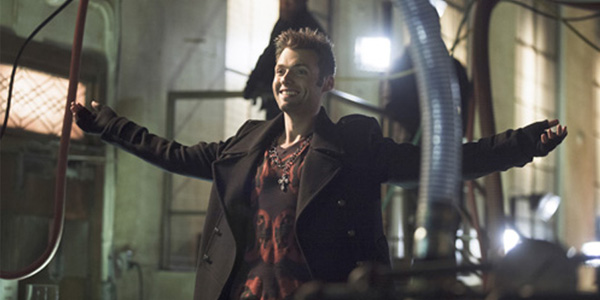 This week Moria’s fate is decided by a jury of her peers, and an old foe returns on the CW’s Arrow.

As the Starling City gets ready for flu season, Vertigo returns to wreak havoc thanks to an mysterious benefactor. Diggle is the first one to show signs of Vertigo withdrawal, Oliver’s antidote does not help at all. It turns out the Count has resigned the drug to trigger withdrawal symptoms instead of a high, making people crave the drug to just get rid of the withdrawal symptoms. He worked with a roaming flu shot truck to distribute the drug throughout the city. It is up to Oliver to trck him down and save Diggle, but there is an even bigger issue going on in his life.

After months of jail and trial Moria’s case is coming to an end, but before it’s over Laurel has to take first chair on the case. The lead DA on the case comes down with a case of the Vertigos and is kidnapped by the Count. While Oliver works to track down the villain, Laurel is put in charge of the case and finds out that Moria was more than an unwilling accomplice in the undertaking. She was romantically involved with Malcolm, and while her husband was a casualty, her children were probably never really in danger. This new info was enough to sway the jury, or so Laurel thought.

Before the jury returned the Count calls Oliver, yes Oliver not Arrow, to tell him he had had Felicity. Oliver rushes to her side, moments before the verdict was handed down. Oliver faces down the Count, but has to make a choice take down the villain to allow him to harm Felicity. She begs him not to take a life, but with her life in the balance there is no choice, and he take the Count for the last time. Oliver rushes back to court just in time to see his Mother cleared of all the crimes. In the final moments learn it was Brother Blood who helped the Count and the new Vertigo, and Malcolm returns to Starling City. Malcolm tells Moria he was the one who turned the jury in her favor, and that Thea was truly his daughter.

Meanwhile on the island, the ship’s crew along with Ivo, Sara, and Oliver head to the plane to take out Slade and Shado and get the info from the bones. Shado and Slade ambush the crew and free Oliver, who takes Sara with them. They learn the hosen has the location of the sub holding the super solider serum, which could heal Slade, and for comic fans create the ultimate Arrow villain.