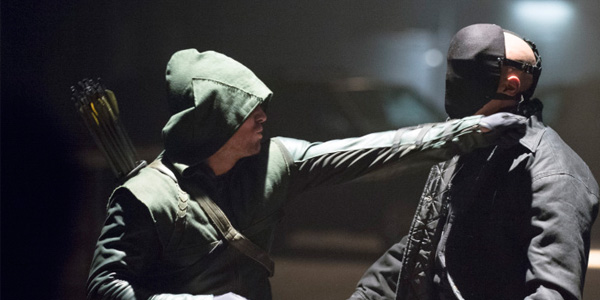 There have been a few heroes to join Olivers fight in Starling City, but this is the first big name to join the show. Barry Allen arrives in this week’s Arrow and he brings a few easter eggs with him.

While the show is centered on the introduction of Barry into this new DC world, it does not feel forced. The crime this week revolves around a robbery of biomedical supplies, which seem to have a “meta” origin. The person who pulled off the robbery is super strong, and fast something Oliver has not had to deal with yet. It appears that the serum that Brother Blood is giving his followers is a type of super solider serum. The first to survive and show results is Cyrus Gold, a rather large man with a temper. While investigating the break into Queen industries Oliver and crew are joined by a forensic investigator from Central City, Barry Allen. A man looking for the unexplained, which could be connected to a case back home. Sparks fly between Barry and Oliver, and Barry and Felicity both for very different reasons. Oliver does not trust the guy, but is willing to give him a chance while Diggle looks into him. Fleecily on the other hand is quite taken with him, fumbling her words and flirting with the new guy. When Diggle finds out that Barry is not here on assignment and only a lab tech not an investigator, Oliver confronts him and gets the true story. Barry is looking for any cases that might have a super powered or weird nature to them. When he was younger his mother was killed by a yellow blurr, and he was transported in an instant miles away from home. His mother’s killer never found and his father blamed for the murder. He is searching for any sings of similar incidents hoping to understand what happened to him.

While Oliver is tracking Gold his mother meets once again with Malcolm only this time she is ready for him. It turns out even though Malcolm has ties to the League of Assassins, he is a friend of Ra’s Al Ghul. Moria puts in a call to the League, and lets them know Malcolm is alive and week running around town, showing she is no longer the wounded widow. Oliver is able to track down Gold, but he is not match for the sup’ed up villain, and is almost killed. The only way to save him is to bring Barry into the Arrow cave.

The story connects to the island this week with the serum. While on the island Oliver and crew have to try to save Slade’s life, and their own hope is the sub with the serum on it. They know they need more than the serum, they need a sedative or he will die from the shock. With Ivo’s crew closing in Oliver does the only thing he can, inject Slade and creates what could be his greatest enemy.