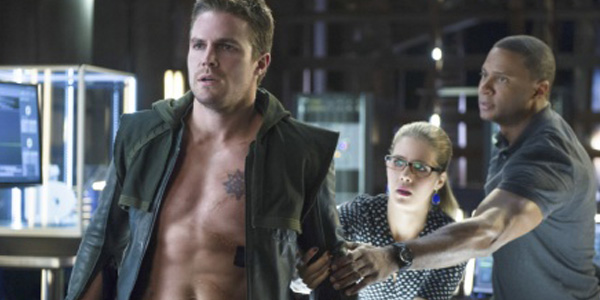 A new look, old enemies, new allies, and so much more. It is only half way through season 2 but this mid season finale felt like it could have been the end of season 2.  And there is so much more doing in Arrow in 2014.

There was so much going on this week it is hard to know where to start. With Oliver’s life hanging in the balance, Barry had to accept and deal with finding out that Oliver was the Arrow. He snapped to quickly and with a little help from some rat poison Oliver was stabilized, and on the mend. When he woke he almost took off Barry’s head, and snapped at Felicity and diggle for sharing his secret with Barry. Throughout the show Barry proved to be a great addition to the team even if twas only for a short time. He was able to clear Oliver of the poison, figure out the identity of Cyrus Gold, and create Oliver’s new mask.

Know the identity of Gold, Oliver had to hand over the information to Quentin, because of some after affect of fighting with Gold. After he awoke Oliver started to see people of the island, people he said had died, in Starling city. First Shado came to him urging him to live life, then Slade telling him to stop pretending, and finally Tommy telling him to stand up and fight. All were touching moments, leading Oliver through stings of grief, allowing him to accept his new role as hero of the city, not a vigilante.

Quentin was able to concise his old partner to track down Gold, but was not prepare even with Oliver’s warnings. Most of the team was killed and Quentin stuck in ICU for a while. Roy also had a run in with Gold, trying to track down info on Sin’s friend who died. He was captured and made the next subject for Blood’s army of super soldiers. Oliver arrives moments too late to save Roy, but is able to finally accept his role and take down Gold. He rushes to Roy, and is able to save his life, but how will the serum effect his sisters boyfriend?

The action in the city also triggered memories of loss on the island. Ivo captured the team leaving a seemingly dead Slade on the sub. Tracking them out to the jungle Ivo give Oliver a choice save Shado or save Sara. Oliver choices Sarah, and Ivo shoot Shado in the head. Moments later Slade wakes up and with his new powers rushes though the island and takes down Ivo’s whole team, but Ivo escapes.

The show ends with a few revelations. Barry returns home just in time to see the reactor malfunction, causing an explosion at his lab and creating the Flash. The man pulling strings behind Blood and his campaign is Slade. Slade is much older looking much more like his comic counterpart with white hair and an eye patch. Roy is healing faster and should have some powers when the dhow returns. Gold may look dead but took a bigger dose of the serum when Oliver beat him causing some mutations. And finally Arrow puts on his mask, a gift from Barry.

It is shaping up to be and amazing season.