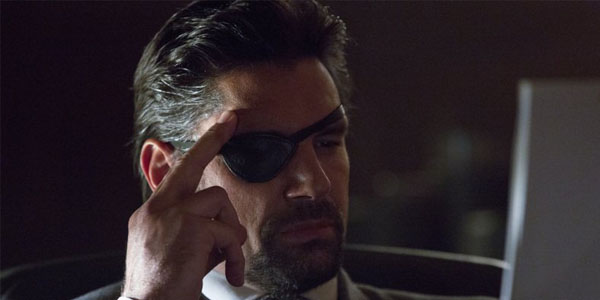 The people around Oliver are going down a darker path, and it is up to him to make sure those closest to him don’t end up being enemies.

Laurel is spiraling in a drug and alcohol induced haze, which has put her on Blood’s radar. Sebastian has being trying to get close to her so he can figure out what she knows, but he is not moving fast enough and Slade has to step in to protect the plan before Laurel and Ollie figure out what is really going on.

Sebastian assures Slade he has a plan, and will take care of Laurel and the Arrow. Blood decides to try to set her up, making her look like a full blown addict and destroying all her credibility. While most of the plan was a set up, Laurel is developing a real problem. It is an interesting take on a theme in the Arrow world, in the comics it was Roy who had the drug problem and needed help. Laurel’s flaws are clearing setting up for her eventual turn into the Black Canary, even though right now she looks nothing like a hero. Blood’s is able to throw both Oliver and Laurel off his trail as the man beneath the skull mask by making one of his followers wear the mask. When Ollie finally takes down the man in the mask it is uncovered that it was the same officer who set up the cops on the Cyrus Gold hunt. This revel only further’s Laurel’s loos of control and trust with everyone in her life.

The other problem in Oliver’s life is Roy, who is starting to test the limits of his new powers. He refuses to tell Thea about his issues, and turns to Sin for help. He comes up with a plan to start taking down villains with his new powers, and Sin points him towards a man who is killing call girls. They set up the guy, and Roy ends up beating him within an inch of his life. He loses total control and ben hits Sin. When Ollie finds out he is forced to step in, and as the Arrow he offers to train Roy. It looks like the duo is starting to take shape, but can Ollie keep roy in check? Or will Slade find out and use the sidekick against him down the road.