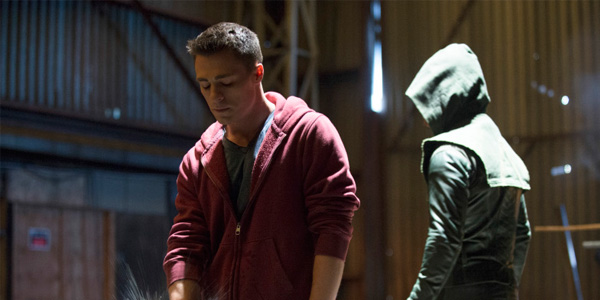 Roy is ready to kill someone, anyone, and it’s up to Oliver to figure out how to get through to him. Find out on if Ollie can save Roy this week’s Arrow.

The title of this week’s episode is Tremors, and while the earthquake machine is back, it refers to the rising anger in Roy thanks to the Mirakuru. Oliver tries to get through to Roy using the same methods Shado used on the island to train, but Starling City is not the island. There are too many distractions, making it impossible for Oliver to get Roy to focus on controlling the new powers. The Mirakuru is taking a hold, and no matter what Oliver tries he can’t seem to get through to him. Making matters worse there is a buyer in town who wants the Markov device, and breaks the Bronze Tiger out of prison to get it. Oliver is able to track the Tiger down, but can’t stop him because Roy keeps losing control.

Oliver and Roy track the Tiger and the buyer to the shipyards, and they are able to take them down, but not before the device is activated. Roy is off beating up one of the thugs while Oliver is trying to get into the container, but he can’t get in and needs Roy’s powers. Unable to get through to the sidekick he flashes back to the island remembering how brought Slade back from the effect of the Mirakuru, love. He reminded Slade of his son at home, and with Roy Thea is that trigger. Oliver does the only thing he can do, reveal his identity to another person, and it works Roy is shocked but able to get the container open and stop the device. The show ends with Bronze Tiger back in prison getting a visit from Amanda Waller. It seems she is starting a Squad.

While Oliver is busy with his new sidekick, his mother and ex are also have some big moments. Moria head out to dinner with Walter, but finds it’s not to rekindle their romance. Walter brings a political advisor with him to try to convince her to run against Blood in the next election. She wavers, but in the end after talking it over with Thea she decides to run. It should be interesting how the new spot light on the Queen Family will impact Oliver’s night job. Laurel is also staring to spiral deeper into a bottle. It looks like she is about to hit her rock bottom, and Quentin sees it coming. He tries to get her to a 12 step meeting but she runs off, and ends up a mess at Verdant. Oliver and Thea get her home, where she passes out, but not before little Sara shows up to help.